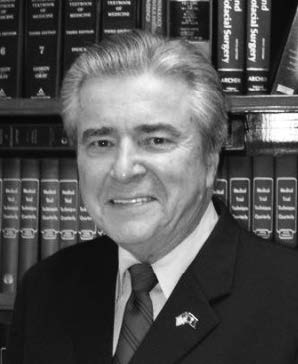 Samuel L. Svalina was born July 2, 1935, in Chicago, IL, to parents Nicholas Svalina and Genevieve Gaskowski Svalina. He received his J.D. from John Marshall Law School in 1959 and was admitted to the Illinois State Bar that same year. He was admitted to the S.C. Bar in 1968.

Svalina served as assistant corporation counsel for the City of Chicago from 1959 to 1967. During this time, he also headed the Democratic Party of South Chicago Precinct for the election of John F. Kennedy in 1960. He served as the president of the South Chicago Bar Association from 1966 to 1967. In 1968, he moved to Beaufort, SC, and began practicing law as an associate at the law firm of Dowling, Dowling, Sanders and Dukes, P.A., where he practiced for 20 years and eventually became a partner. In 1988, he left the law firm of Dowling, Sanders, Dukes, Novit and Svalina to establish his own practice, Svalina Law Firm, P.A., with his son and partner, Samuel S. Svalina.

He was well known throughout the community for his patriotism, loud voice and unyielding personality. He was the quintessential “small town lawyer” and was willing to help anyone that walked through the door of his office. He passionately believed in the pursuit of justice and the importance of defending the rights of those unable to defend themselves. While some might remember him for his zealous representation of clients in the courtroom and winning large verdicts, those that knew him best will remember his heart of gold and willingness to go to great lengths to assist people as a matter of principle with no discussion of a fee.

Samuel L. Svalina died on November 16, 2013. He is survived by his son, Samuel S. Svalina, and grandchildren, S. Tristan Svalina and Sophia L. Svalina. He was preceded in death by his wife, Diana Popoff Svalina, and their daughter, Linda Svalina.