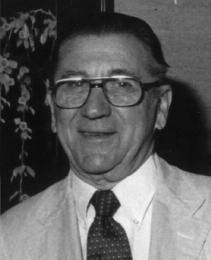 Professor Charles H. Randall, Jr. was born January 12, 1920, in Boston, MA, to parents Mary Ethel Randall and Charles H. Randall. A decorated World War II veteran, Col. Randall received the Distinguished Flying Cross and Air Medal 3 Oak Leaf Clusters. He was commissioned a 2nd Lieutenant in the U.S. Army Air Corps Reserve, as an aerial navigator, flying missions over the Atlantic against German submarines and flying a B17 to Italy by way of Brazil. In 1973, Col. Randall was awarded the Air Force Commendation Medal.

He retired in 1980 from the Air Force Reserve with the rank of Colonel. In 1996, he was awarded the commemorative medal “The 50th Anniversary of the Victory in the Great Patriotic War” (WWII) in recognition of his courage and personal contribution to the allied support of Russia during her fight for freedom against Nazi Germany. The medal was awarded by then president Boris Yeltsin.

He was faculty assistant in charge of the Ames Competition at the Harvard Law School and was a member of the elite Harvard Law School Emeritus Club. Professor Randall was also a Distinguished Visiting Professor at Tulane University and George Washington University. He served as a member and, for a period, chair of the S.C. Judicial Council, the leading state agency for judicial law reform. He was a former member of the South Carolina Law Enforcement Training Council. For many years, he was a hearing officer for the Department of Energy, Savannah River Operations Office. He was a member of the Kosmos Club and Dr. Raymond Moore’s Monday Lunch Group.

During his tenure as acting dean of the University of South Carolina School of Law, he served with great distinction during a very difficult period, managing a series of budget cuts and maintaining the quality of the faculty. He was chair of the Law School Tenured Faculty Committee and longtime chair of the law school’s admission committee. He was named the prestigious James F. Byrnes Professor, an appointment that was renewed for a second term. His courses included constitutional law, environmental law, judicial remedies and estate planning. Prof. Randall was instrumental in establishing environmental law as a course at the University of South Carolina School of Law.

He was a founding member and executive committee member of the John Belton O’Neall Inn of Court, a chapter of the national organization formed due to the efforts of then Chief Justice Warren Burger, U.S. Supreme Court, who asked Professor Randall and others to form this Inn.