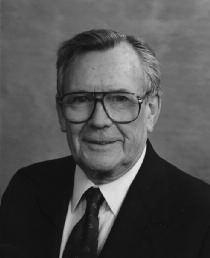 Gene V. Pruet was born June 6, 1924, in Waurika, OK, to parents Eunice Davis Pruet and Earl D. Pruet. He obtained an engineering degree in 1947 and a law degree in 1949 from the University of Oklahoma, where he lettered in track. He served in the U.S. Navy, Pacific Rim, during World War II.

Pruet was admitted to the Oklahoma Bar in 1950 and to the South Carolina Bar in 1952. He had a successful career as both litigator and tax attorney and was one of the founding partners of Nexsen Pruet, formerly Nexsen Pruet Jacobs & Pollard. He retired in 1992 and moved to Falls Church, Virgina.

He was a devout Christian and a member of Immanuel Church on the Hill in Alexandria, VA, and St. Martin’s in the Fields Episcopal Church in Columbia, South Carolina. He was an avid golfer, belonging to the Spring Valley Country Club in Columbia, South Carolina, and the Washington Golf and Country Club in Washington, DC. He was also a lifetime member of the Sooner Club and was a fan of Sooner football.