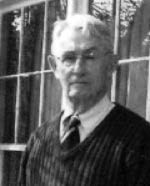 David H. Crum was born on July 11, 1927, in Denmark, SC, to parents John W. Crum and Priscilla Hart Crum. He served in World War II and after his discharge from the U.S. Army returned to the University of South Carolina, where he received his Bachelor’s degree in 1953. He earned his LL.B from the USC School of Law, where he was a member of Omicron Delta Kappa and Phi Delta Phi fraternities.

Crum moved to Washington, DC, where he served as one of Sen. Strom Thurmond’s first senatorial aides. After his father’s death, David returned to Denmark to practice law with his brother, H. Hayne Crum, at the firm founded by his father in 1910. David practiced in Denmark for 59 years until his death in 2012. He practiced in South Carolina’s state and municipal courts. While David enjoyed and concentrated on the practice of trusts and estates, tax and real estate, he was a true “country lawyer.” He had a sharp and insightful mind and helped people in Bamberg, Barnwell and Orangeburg counties and beyond with all types of matters, whether the client could pay or not. As far as David was concerned, his clients were his friends and he was helping them.

Crum was a lifelong member of the Lions Club and Bethel Park United Methodist Church, serving in all of the church’s leadership capacities. He served on the Bamberg County District Two School Board and the board of the Denmark Library. He was a member of the Denmark Country Club, serving as its president, secretary and treasurer. David sang for many years in the Columbia Choral Society. He was an avid Gamecock fan and a long-time member of the USC Alumni Association.