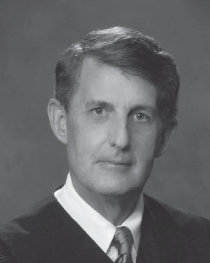 The Honorable Walter “B.” Brown, Jr. was born April 10, 1947, in Columbia, South Carolina, to parents Clara A. “Tan” Miller Brown and Walter B. Brown Sr. A native of Winnsboro, South Carolina affectionately known as “B.” he was educated at Mount Zion Institute and Winnsboro High School. In 1969, he received his B.S. degree in business administration from the University of South Carolina, where he was president of his freshman class and a member of Kappa Alpha Order fraternity. After service in the National Guard, he earned his Juris Doctor from USC School of Law in 1973, becoming the third generation of attorneys in his family.

Upon graduation, “B” joined the law practice of Sen. John A. Martin. He was city attorney for the Town of Winnsboro prior to his election as a family court judge. Judge Brown served the Sixth Judicial Circuit until his death. He was past president of the S.C. Conference of Family Court Judges and in 2006 was the first family court judge to be honored by the S.C. Association for Justice (formerly known as the S.C. Trial Lawyers Association). During his tenure as an attorney and as a judge, he supported families through the legal process. His commitment to parents and children reflected his own devotion to his family.