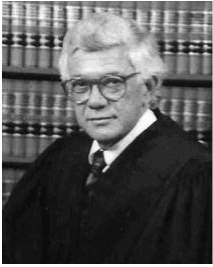 The Honorable Owens T. Cobb, Jr. was born February 27, 1933, in Columbia, South Carolina, to parents Kathryn Williams and Owens T. Cobb. He graduated from Columbia High School in 1951 and attended Clemson University until his education was interrupted by his service in the U.S. Army during the Korean Conflict. Following his military service, Judge Cobb resumed his education at the University of South Carolina where he received his bachelor’s degree. As an undergraduate, he was a member of the Sigma Alpha Epsilon Fraternity. In 1959, he received his law degree from the University of South Carolina School of Law.

Following his graduation from law school, Judge Cobb began his legal career with the Columbia law firm of Seigler and Seigler. He later formed a partnership with E. Crosby Lewis and the late Daniel S. Lewis, known as Lewis, Cobb & Lewis. In November 1961, Judge Cobb was elected to the S.C. House of Representatives and served two terms. During his tenure in the House, he also served as chair of the Richland County Democratic Party. While serving in the state house from 1962 to 1966, Judge Cobb worked to improve education.

Judge Cobb served at every level of trial judge in the judicial system of South Carolina, first as a municipal judge for the town of Forest Acres from 1966 to 1971. Thereafter, he succeeded the late Harry M. Lightsey, Sr. as Master-In-Equity for Richland County. He was elected Richland County Court judge in 1975 and served as a family court judge upon his election in 1980, succeeding the late Judge J. McNary Spigner. In 1983, upon the retirement of Judge John B. Grimball, Judge Cobb was elected as a circuit court judge for the Fifth Judicial Circuit by the S.C. General Assembly, a position he held until his retirement from the bench in 1988.

After his retirement, Judge Cobb became general counsel for Blue Cross Blue Shield and later served as an arbitrator and mediator for the S.C. Court System.