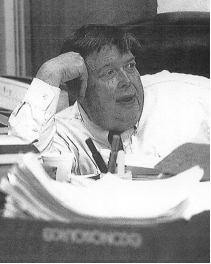 The Hon. Thomas Kemmerlin, Jr. was born August 12, 1931, in Bowman, SC, to parents Rev. Thomas Kemmerlin, Sr. and Eunice Baker Kemmerlin. He earned a B.A. from Wofford College in 1952 and his LL.B. from the University of South Carolina School of Law in 1954.

Before moving to Beaufort, Kemmerlin was a lecturer at the University of South Carolina School of Law, adjunct professor at the Darla Moore School of Business, and a Columbia lawyer for 30 years. He loved literature, played the French horn, clarinet and piano, and was a concert–level harpsichordist. In 1987, he was appointed master–in–equity for Beaufort County. He also served as a special circuit court judge.

Judge Kemmerlin helped shape the future of Beaufort County and Hilton Head Island with rulings that ranged from multi-million dollar damage awards to the legality of selling 25-cent oysters.

In 1992, he upheld a “transfer fee” on real estate purchases that the Town of Hilton Head Island had used to buy open space and was involved in the battle over a proposed expressway to connect the two ends of the island. Many of his cases eventually were heard by the state Supreme Court, which rarely overruled him.

At a time in which most legal opinions were written in colorless legalese, Kemmerlin’s were woven with his personal observations, humor and often acerbic jabs. In one, Kemmerlin wrote,“Hilton Head is an island off the coast of South Carolina on which a number of housing projects have been built, almost all of which are uniform in their darkly stained–wood dullness. The houses and condominia in these projects are made dull not for the intentional purpose of being ugly, but rather so that they “blend” into such woods as are left after much of the island has been flat-cut to create golf courses.”

Colleagues, who referred to Kemmerlin as “Tommy,” said his distinctive judicial style even won over people on the losing end of his decisions. S.C. Sen. Tom Davis, Beaufort, said Kemmerlin was “a true Southern character” ideally suited to preside over “a people’s court.” “He knew the law backwards and forwards,” said Davis, a real estate lawyer who tried his first case before Kemmerlin and frequently sought his counsel thereafter.

Kemmerlin also had a “fundamental sense of fairness and equity and common sense,” Davis said. Kemmerlin always tried to seek common ground, Davis said. If Kemmerlin considered a lawyer’s argument irrelevant, he would begin reading from a seed catalog, share his views on each sidess case and suggest they take a break to try to reach an agreement. Kemmerlin disliked lawyers he considered obnoxious and often joked he wished duels hadn’t been outlawed, Davis said.

Family members said Kemmerlin was generous and loyal to family and friends. He never married or had children, but he adored his nieces and nephews and regularly took in cats and dogs, sister Bee Kemmerlin Brown of Sumter said. Kemmerlin took his three sisters to the opera and taught them to play bridge, said Brown, who called Kemmerlin “the best brother that any girl could ever have had.”

Judge Kemmerlin was a member of the S.C. Bar and Beaufort County Bar Association. In addition, he was a charter member of Lady’s Island Water’s Edge United Methodist Church and a member of the Beaufort Symphony and Coosaw Island Chamber Music Society.