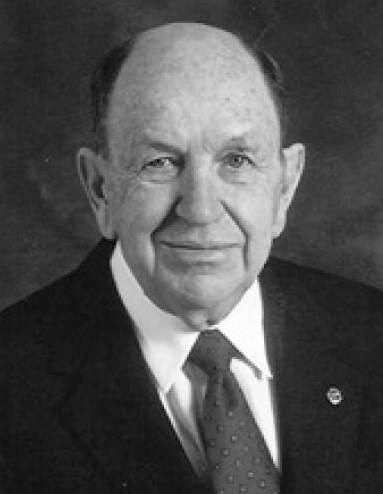 Fletcher D. Thompson was born August 11, 1921, in Partlow, Virginia to parents Jennie Lee Brown and Charles Hiram Thompson. He graduated from Spartanburg Methodist College, formerly the Textile Industrial Institute; and received his J.D. from the University of Toledo Law School in Toledo, Ohio.

His 33-year career with the Federal Bureau of Investigation (FBI) covered a period of active service in the Marine Corps during World War II, followed by assignments in four FBI field offices, and three tours of duty at FBI Headquarters in Washington, D.C. At the time of his retirement from the FBI, he served as assistant director of the FBI, and oversaw the Bureau’s largest division.

In 1975, he and his family returned to Spartanburg. He was admitted to practice law in South Carolina and began a second career. He opened a law practice that primarily focused on the field of adoption and probate law. In 1999, his son, James F. “Jim” Thompson joined the practice, which continues to provide legal counsel as the Thompson Dove Law Group.

Fletcher was a member of the Virginia Bar and the SC Bar. He was admitted to practice before the U.S. Supreme Court.

In 1999, he and his son Jim were recognized with the first-ever Angel in Adoption Award presented by the U.S. Congressional Coalition on Adoption. In the same year, the American Academy of Adoption Attorneys recognized him as an “Honorary Member” of the Academy a distinction shared by only seven other attorneys nationally, and is reserved for members whose ‘individual accomplishment brings distinction to the academy’.

For over four decades, he was an active member of the Bethel United Methodist Church in Spartanburg. In addition, he could be found every Monday at the Spartanburg Lions Club meeting, where he would sell brooms for the club’s fundraising projects in between those meetings.