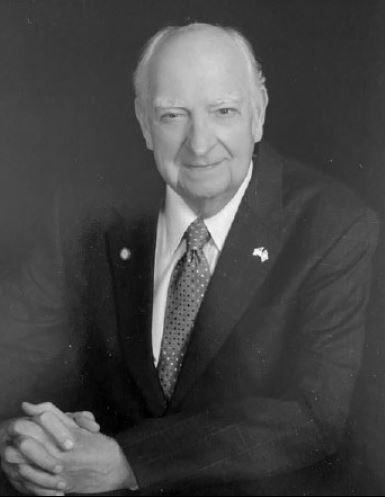 William H. Gibbes, Sr., USAR (Retired) was born February 25, 1930, in Florence to parents Nancy Watson and Ernest Lawrence Gibbes. He received his B.S. degree in Business Economics from the University of South Carolina in 1952 and his LL.B from the UofSC School of Law in 1953. While in college, he was a member of the ODK Debate Society, Pi Kappa Alpha Fraternity, and an officer of the Euphradian Literary Society.

He obtained a direct commission as a first lieutenant in the JAG Corps and entered the Army in 1954 and was sent to Charlottesville, Virginia to attend the Judge Advocates’ School. Upon completion, he would spend his military career trying cases during the Korean War and after. During his time in the JAG Corps, he was awarded the Legion of Merit in 1983. He organized the 360th reserve unit of the 12th Legal Operations Detachment Army Reserve JAG Corps. He was awarded the Star of a Brigadier General before he became the Chief Judge of the Army Reserve.

In 1957, Bill served as Assistant Attorney General of South Carolina before establishing his private practice, Berry & Gibbes in 1962. The practice would later be known as Berry, Lightsey & Gibbes and ultimately as William H. Gibbes, P.A.