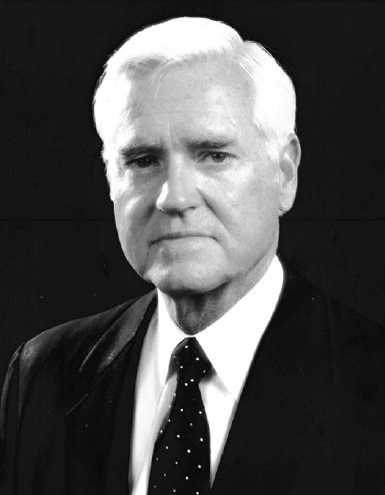 Senator E. "Fritz" Hollings was born January 1, 1922, in Charleston to parents Wilhelmine Dorothea Meyer and Adolph Gevert Hollings. He received his B.A. from The Citadel in 1942; and his LL.B from the University of South Carolina School of Law in 1947. He received honorary doctorate degrees from The Citadel (1960) Augusta School of Law (1974), Baptist College (1975) UofSC (1980), and Benedict College (1971).

In 1947, he began practicing with his uncle, Ernest “Major” Meyer in Charleston and later established his own firm as a sole practitioner. In 1948, he was elected to the South Carolina House of Representatives, serving three terms and elected Speaker Pro Tempore in 1951 and 1953. He was elected as Lieutenant Governor of South Carolina in 1954 and was named One of Ten Outstanding Young Men of the Year by the U.S. Junior Chamber of Commerce. In 1958, he was elected Governor of South Carolina. Upon election, Fritz tripled the membership of the State Development Board, and doubled its budget; thus, ensued an early “golden age” of industrial recruitment in South Carolina. In 1963, Fritz and U.S. District Court Judge Falcon B. Hawkins, Jr. formed the firm of Hollings & Hawkins.

He served as an Army artillery officer in World War II, taking part in five battle campaigns and receiving The Bronze Star for meritorious service in direct support of combat operations in France and Germany. He received the European-African-Middle Eastern Campaign medal with five Bronze Service Stars, and, in 2013, was the honored recipient of the National Order of the Legion of Honour for meritorious military conduct on the battlefield in defense of France.

In 1966, he was elected to the U.S. Senate and was re-elected in 1968. He was re-elected to the U.S. Senate a total of six times and retired from the Senate in 2004, having served in the Senate for 38 years. As Senator, he consistently fought to roll back textile imports which were undercutting our state’s important textile industry, and he continued his efforts to foster new jobs and broaden economic opportunity for the people of South Carolina.

He was author of “A Case Against Hunger: A Demand for a National Policy (1970).” Fritz was instrumental in enacting legislation to alleviate childhood hunger; chief author of the Graham-Rudman-Hollings Act, which would have eliminated the federal budget deficit (1985); and author, with Kirk Victor of “Making Government Work (2008).”

Fritz was a member of the SC Bar, Charleston County Bar, and a member and former president of the UofSC Law Federation, Charleston Citadel Club, and The Hibernian Society. He was chair of the U.S. Senate Budget Committee and Commerce Science and Transportation Committee, and a senior member of the Senate Appropriations Committee and chair of the Democratic Senatorial Campaign Committee. He was a member of The Alfalfa Club and was listed in Who’s Who in America.

He was a member of St. John’s Lutheran Church in Charleston. He also attended Stella Maris Roman Catholic Church on Sullivan’s Island.