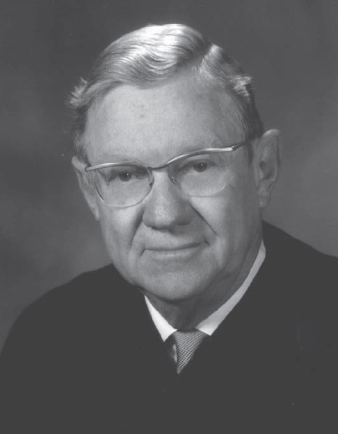 The Honorable Robert F. Chapman was born April 24, 1926, in Inman to parents, James A. Chapman and Martha Marshall Chapman. In 1943, he entered the Navy, in the V-12 Program at Emory and Henry College. In 1944, he transferred to the naval ROTC at the University of South Carolina and received his B.S. degree in 1945; and was commissioned as an ensign. In 1949, he received his LLM from the University of South Carolina School of Law.

He entered the practice of law as an associate with Osborne, Butler & Moore until 1951, when he was recalled to active duty with the Navy. Upon his return in 1953, he formed the law firm of Butler & Chapman, which later became Butler, Chapman, Parker & Morgan. In 1971, he was appointed as a U.S. District Judge by President Richard M. Nixon. In 1981, he was appointed by President Ronald W. Reagan to the U.S. Court of Appeals for the Fourth Judicial Circuit, where he served until electing senior status in 1991.

Bob received an Honorary Doctor of Laws degree from the University of South Carolina in 1986 and an Honorary Doctor of Humanities from the College of Charleston in 1999. In 1978, he received the Order of the Palmetto. He was a member of the American College of Trial Lawyers. He was an elder at First Presbyterian Church in Spartanburg and an elder at Bethesda Presbyterian Church in Camden. He was a trustee at Converse College from 1993 until 2001.

The Honorable Robert F. Chapman died on April 18, 2018. He is survived by his children, Edward B. Chapman, A. Foster Chapman and Winston G. Chapman.