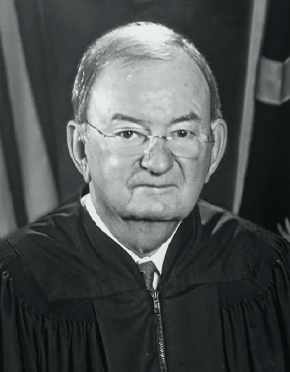 The Honorable C. Victor Pyle, Jr. was born December 24, 1934, in Greenville, SC to parents Eugenia Smith Pyle and Charles Victor Pyle. He received an LLB in 1959 from the University of South Carolina and his J.D. from USC School of Law in 1970.

From 1959 until 1976, he practiced law with Pyle and Pyle Attorneys. From 1965 until 1968, he was municipal judge of Greenville County and in 1968, was elected to the House of Representatives, where he served three terms and was vice chair of the Judiciary Committee. He was an elected judge of Greenville County in 1976, circuit court judge at large in 1979, and judge of the Thirteenth Judicial Circuit in 1982. He retired in 2000 but continued to work as an active retired judge until 2017.

Judge Pyle was a member of the Greenville County Bar Association, SC Bar, Greenville Rotary Club (Paul Harris Fellow), Poinsett Club, Buncombe Street United Methodist Church, serving on numerous church committees including chairman of the board of trustees from 2002 until 2008.