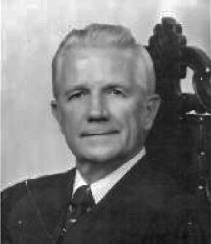 The Honorable Luke N. Brown Jr. was born was born November 16, 1919, in McCormick, SC, to parents Luke N. Brown Sr. and Henrietta Dorn Brown. He attended the University of South Carolina School of Law from 1947 to 1951, while raising three children and working for SLED. He was a Navy veteran of WWII, having served in both the North African and European theaters.

In 1948, he was an alternate delegate to the Democratic National Convention and aide to Sen. William P. Baskin, chair of the SC Democratic Party. He also assisted Sen. J. Strom Thurmond in various capacities. After law school, he moved to Ridgeland, SC, and began his career as an attorney with Henry C. Walker Law Office and later opened his own practice. While a practicing attorney in Ridgeland from 1951 until 1980, he was highly respected for his work as a criminal and general practice trial attorney.

On March 26, 1980, at the age of 61, he became the first and only circuit court judge to date from Jasper County. Judge Brown was elected by unanimous acclamation of the legislature to serve the 14th Judicial Circuit. While a judge, and on several occasions, he served on the SC Supreme Court in the absence of a Supreme Court Justice while in session. After practicing as an attorney for 29 years and serving on the bench for 20 plus years, Judge Brown continued working as a special referee for Jasper County and surrounding counties until his passing at the age of 94.

Judge Brown served on the board of directors for the Bank of Ridgeland and was a long-standing member of the Ridgeland Business Association and Jasper County Chamber of Commerce.

He was an active member of St. Paul’s Methodist Church, serving as Lay Leader and Sunday school teacher for young married couples for many years. During the last 15 years of his life, he enjoyed attending Abundant Life Tabernacle in Hardeeville. He was also a member of the Masonic Lodge, Omar Shriner and the American Legion.