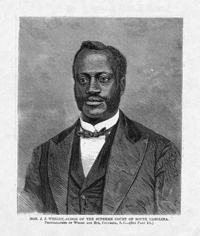 Jonathan Jasper WrightWright was born in Luzerne County, Pennsylvania on February 11, 1840. He attended college at Lancasterian University in Ithaca, New York. After leaving college, he taught school and studied law in Pennsylvania, but the local judge refused to grant Wright admission to the bar. The American Missionary Association sent Wright to South Carolina in 1865 to organize schools. He taught black Union troops and was soon giving legal advice to former slaves. His “political activities” did not sit well with some of his fellow missionaries and after one year he returned to Pennsylvania where, in 1866, he was the first African American to be admitted to the bar. His law practice was not very lucrative so Wright returned to Beaufort and served as a legal advisor for the Freedmen’s Bureau. His legal practice on behalf of freedmen in Beaufort was extensive. In ten months of 1867 he handled over two thousand cases. In 1868 he entered politics. He was a delegate and vice-president of the State Constitutional Convention in 1868. Following the convention, he was elected State Senator from Beaufort County, where he served until being elected to the South Carolina Supreme Court in 1870. Wright served on the Court until 1877 when he resigned to avoid an impeachment trial based on allegations of public drunkenness. These charges were brought by white Democratic legislators determined to remove all blacks from office. Wright moved to Charleston and practiced law for eight years and founded the law department at Claflin University in Orangeburg. Under his professorship the school had seven graduates; however, but before the school could really be developed Wright was stricken with tuberculosis. He died on February 18, 1885 at his home in Charleston and buried at Calvary Church Cemetery.