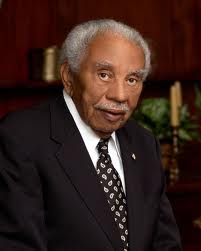 Ernest Adolphus Finney, Jr., the son of Ernest A. Finney and Collen Goodwin Finney, was born on March 23, 1931 in Smithfield, Virginia. He earned his B.A. from Claflin College in 1952 and his law degree from The South Carolina State University School of Law in 1954. He was admitted to the bar that same year. After law school, he was a public school teacher in Conway until 1960 when he moved to Sumter and began practicing law. In 1961, Finney represented nine students who had staged one of the first sit-ins in South Carolina. Teaming with Matthew J. Perry, Finney became one of the premier civil rights lawyers in the state. While his criminal defenses seldom succeeded at trial, he won nearly all of his appeals on behalf of civil rights demonstrators. He was elected to the State House of Representatives in 1972 and became the first African-American to serve on the House Judiciary Committee since the 19th Century. On July 22, 1976, the General Assembly elected him judge in the Third Circuit, and he became the state's first African-American Circuit Court Judge. In 1985 he was elected to the South Carolina Supreme Court and served as an associate justice until he was elected Chief Justice on May 11, 1994. While he was the author of numerous opinions as a member of the state supreme court, his most important and memorable decision was Abbeville School District, et al v. South Carolina, which declared that the state constitution required the state to provide students with adequate and safe facilities in which they must have an opportunity to learn to read and write to speak English, to acquire a knowledge of mathematics, physical science, economics, political science, history, and government. 335 S.C. 58, 515 S.E. 2d 535 (1999). He remained Chief Justice until his retirement in 2000. Following retirement from the judiciary he went into private practice with one of his sons. Then he agreed to serve as president of south Carolina State University. He is now Of Counsel at The Finney Law Firm, Inc. in Columbia, South Carolina.