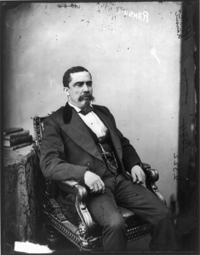 Ransier was born free in Charleston on January 3, 1834. He received limited schooling and by 1850 was employed as a clerk with a Charleston shipping firm. He attended the 1865 Colored People’s Convention in Charleston. He and 52 other delegates urged the State Legislature to reject the Black Codes. He presented a framed memorial from the Convention to Congress. He served as a delegate at the State Constitutional Convention in 1868 and in the State House of Representatives from 1868 to 1869. He was elected Lieutenant Governor of South Carolina in 1870 becoming the first black man elected to that office in State’s history. He was president of the Southern States Convention at Columbia in 1871. Ransier was a delegate to the Republican National Convention in 1872 and was elected as a Republican to the Forty-third Congress (March 4, 1873–March 3, 1875). A strong advocate for equal education, Ransier voted against the 1875 Civil Rights Act because the bill had been amended to omit its requirement of equality in public schools. After leaving Congress, he served as the United States Internal Revenue Collector for the Second District of South Carolina in 1875 and 1876. He died in Charleston on August 17, 1882 and was interred in Unity Friendship Cemetery.