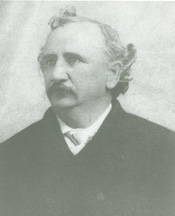 Thomas E. Miller was born in Ferrebeville, Beaufort County, S.C. on June 17, 1849 and moved with his parents to Charleston in 1851 where he attended schools for free blacks. After the Civil War he moved to Hudson, New York to attend school. He then enrolled at Lincoln University in Chester County, Pennsylvania. He graduated from Lincoln in 1872 and moved to Grahamville, S.C. where he served as school commissioner of Beaufort County. He was elected to the State House of Representatives in 1874 and served until 1880. He attended the South Carolina University School of Law and was admitted to the bar in 1875. He practiced law in Beaufort and continued to remain active in politics. He served in the House of Representatives again from 1886–1887 and was elected to the State Senate in 1880. He served only for two years of his four year term before resigning. He ran unsuccessfully for Congress in 1886. In 1888, he ran again and the white Democrat was declared the winner by the state board of canvassers. Miller successfully contested the election of William Elliott and was finally seated as a member of Congress serving from September 24, 1890 to March 3, 1891. In the 1890 election he was defeated by Elliott, and was unsuccessful in his second attempt at contesting the election. In 1892, Miller again ran for congress but failed to obtain the Republican nomination losing to the eventual winner, George Washington Murray. Miller was returned to the State House of Representatives by Beaufort County from 1894–96. He was a delegate at the 1895 State Constitutional Convention where he was a forceful opponent of the disenfranchisement of black voters, a goal which was sought by most of the other delegates. White supremacy prevailed for the next 70 years African Americans in South Carolina had a very limited voice in the state’s political life. Following the convention, Miller was elected president of the newly created state college for blacks in Orangeburg. The school is now known as South Carolina State University. Miller held the presidency until he was forced to resign in 1911. He returned to Charleston, practiced law, and helped organize the local NAACP chapter. In 1919 he led a successful campaign to obtain jobs for black teachers in the Charleston county public schools. Miller moved to Philadelphia in 1923, only to return again to Charleston in 1934, where he died on April 8, 1938. He is interred in Brotherly Association Cemetery.