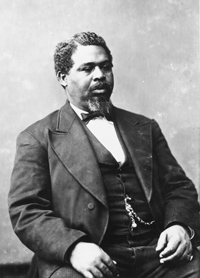 Smalls was born a slave in Beaufort on April 5, 1839. He was hired out by his master to work in Charleston in 1851. He worked numerous jobs but had great skill as a sailor. When the Civil War came, he was impressed into piloting a Confederate steamer. In the spring of 1862, Smalls piloted his steamer, The Planter, across confederate lines and surrendered it to the Union. He was rewarded $1,500 by Congress and became an officer in the U.S. Navy. He commanded his ship for the United States Navy until the end of the Civil War. After the War he settled in Beaufort and became active in the Republican party. Smalls represented Beaufort as a delegate to the State Constitutional Convention in 1868. Later that year, he was elected to the South Carolina House of Representatives. He was elected to represent Beaufort County in the State Senate in 1870. He was a delegate to the Republican National Convention in 1872 and again in 1876. He was twice elected to Congress and served from March 4, 1875 to March 3, 1879. While in Congress he was tried and convicted in the state courts of South Carolina of corruption charges arising from Reconstruction and the attempts by white Democrats to remove all Republicans from office. Smalls refused to resign and was eventually was pardoned by the governor. He was defeated in his bid for reelection in 1878 and again in 1880 by George D. Tillman. Smalls, however, successfully contested Tillman’s election in 1880 and was returned to Congress from July 19, 1882 to March 3, 1883. He then failed to win reelection again in 1882, but was returned to Congress March 18, 1884 to fill the vacancy caused by the death of Edmund W.M. Mackey. He was reelected to the Forty-ninth Congress in November 1884 and served until March 3, 1887, having run unsuccessfully for reelection in 1886. He served as one of the few black delegates to the Constitutional Convention of 1895. Despite his best efforts, the state’s constitution was rewritten to effectively disenfranchise black voters. After leaving office he became collector of customs for the port of Beaufort in 1890, and, with the exception of two years, served continuously until 1913. Smalls died in Beaufort, S.C. on February 22, 1915 and was interred in the Tabernacle Baptist Church Cemetery.