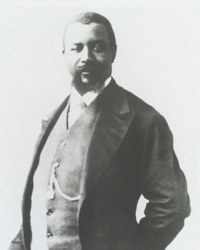 Whipper was born January 23, 1834 in Norristown, Pennyslvania and named for his uncle, William Whipper, the prominent abolitionist. As a young man, he worked as a laborer on a farm in Chester County, Pennsylvania. He moved to Ohio and became active in the abolition movement. In 1859, Whipper gave a speech at a young people’s abolitionist meeting in Salem, Ohio. In April of that year, Whipper cast a ballot in township elections of Charlestown, Ohio — in defiance of a state law that forbade blacks from voting. By 1861, Whipper was an agent for the Anti-Slavery Society. After legal efforts in Cleveland failed to free the fugitive slave Sara Lucy Bagby, Whipper and W.A. Tyler failed in their attempt to hijack the rail car that was transporting Bagby back to slavery. Soon Whipper moved to Detroit to read law and may have been admitted to the Ohio bar and practiced law. He was active in the State Central Committee of Colored Men and spearheaded their efforts to obtain the right to vote in Michigan. In 1864, Whipper volunteered for the 31st Colored Troops. After his discharge in November of 1865 he moved to Charleston and began practicing law. When his first wife died, Whipper married Frances Anne Rollin of Charleston.

In the early days of Reconstruction the state was under military rule, and it was during that period, in the military provost courts of Charleston and Beaufort, that Whipper first appeared as a trial lawyer. In November 1866 Whipper filed a complaint with the military governor alleging that General William T. Bennett, a member of the Beaufort provost court, was abusing black citizens. Significantly, Whipper was co-counsel with Jonathan Jasper Wright, another prominent black lawyer who would later become the State’s first black Supreme Court Justice. United States v. William T. Bennett in February of 1867 was probably the first instance of black attorneys practicing before a legal tribunal in South Carolina on record. As a result of case, Bennett was relieved of duty.

In 1868 Whipper was elected to the State Constitutional Convention. The new constitution was the first in the State’s history to be ratified by the majority of the state’s whole population. It was a revolutionary document. It established the state’s first public schools, guaranteed civil rights to all, and gave all male citizens over 21 the right to vote. As the delegates finished debating the franchise section of the new constitution Whipper made a motion that the word "male" be stricken and substituted with "every citizen." Whipper gave a short forceful speech in support of women’s suffrage. Whipper was serious, but his fellow delegates interrupted him with “frivolous” remarks which went unrecorded and unattributed. The report of the debate simply notes that Mr. Whipper’s motion was “decided in the negative.”

When State Representative James Martin and State Senator B.F. Randolph were murdered, the legislature held a memorial service where Whipper delivered an impassioned speech. If Whipper had not made his mark as a radical before, he certainly made it that day. Whipper began his speech by eulogizing the murdered black legislators and then condemned those responsible for the murders. He said:

I do not charge any particular individual with complicity in these crimes, as I know not the foul hands which perpetuated them, but I do arraign the Democratic party of South Carolina, and charge it with responsibility of these heinous outrages. I am reminded of a dream once related of a celebrated warrior, in which arose before him an army reduced to skin and bones, pointing their bony fingers at him, they said ’thou art the cause.’ And could the shades of the departed Martin and Randolph stalk forth from their bloody tombs, they would point their gory fingers at the Democracy and say, ‘you are the cause.’

Despite threats, physical violence, and hard economic times, black legislators like Whipper had an immediate impact on the law. They transformed the state by making civil rights paramount on their agenda. In the first legislative session of 1868, these men wrote and enacted the state’s first civil rights statute, ratified the 15th Amendment, and abolished capital punishment except in cases of willful murder. Whipper introduced legislation to compensate the widows and orphans of victims of political crimes. This bill died but was later modified and passed, in limited form, in 1872.

In the early days of Reconstruction the white Republican leadership had decided to curry favor with white Democrats by electing only white judges. While some blacks acquiesced Whipper opposed the plan and others soon joined him. In 1870, the General Assembly elected Jonathan Jasper Wright to the Supreme Court even though there were still no black circuit court judges. Whipper ran unsuccessfully for the Supreme Court, the Circuit Court, and Criminal Court of Charleston. Finally, in December 1875, Whipper was elected to the Circuit Court. Whipper had the misfortune, however, of running simultaneously with ex-governor Franklin J. Moses — a notorious figure. Whipper faced five opponents but was elected by a comfortable margin of 83 to 59. Moses faced more opponents and barely won by a vote of 70 to 69.

While Whipper had faced some opposition in the legislature and some minor criticism in the press, the firestorm in the white community caused by his election is only explained by his race. Leading the charge against him was Republican Governor D.H. Chamberlain who claimed to be outraged by the election and refused to issue the necessary commissions for Whipper and Moses to be seated. The governor’s opposition was supposedly based on the claim that Whipper and Moses were corrupt, but he was, in fact, trying to curry favor with white Democrats. His assertions that Moses was corrupt were certainly true, but his accusations against Whipper were, at best, a contrived political reaction and, at worst, a racist appeal to white voters. Undoubtedly Whipper was a gambler and flamboyant figure — even his granddaughter accused him of gambling and drinking too much — but he was not corrupt.

For example, the most infamous instance of Reconstruction political “corruption” was the 1872 election of U.S. Senator John J. Patterson. Patterson bought his seat in December 1872, however, when Whipper was not even a member of the legislature. Another major scandal of that era centered on the owners of the Republican Printing Company who had bribed legislators to secure lucrative government printing contracts and line their pockets with funds from the state printing budget. When the post-Reconstruction legislature held hearings on corruption the two printers testified extensively about whom they had bribed. One of them never mentioned Whipper, and the other, Josephus Woodruff, presented a large number of bribery checks to the committee. One of those checks, was payable to Whipper for $200 but had never been cashed. After the hearings, the legislative committee issued a 1,700 page report on corruption during Reconstruction. Twenty-seven pages of the report listed all the bribes paid to Reconstruction-era legislators. Whipper’s name was not on the list.

In addition to being a lawmaker, Whipper was an outstanding trial lawyer. Whipper was involved in murder and other major criminal cases in Georgetown, Aiken, Barnwell, Charleston, and Beaufort counties. One of the biggest trials in the history of Georgetown County occurred in June 1875. The defendant, who was accused of murder, was Christopher Columbus Bowen the sheriff of Charleston County and a former Congressman. Bowen was married to Susan Petigru King, daughter of South Carolina’s most famous antebellum lawyer James Louis Petigru. As Republican boss of Charleston County Bowen was a controversial figure, having once been convicted of bigamy and pardoned by President Grant. He frequently sued the Charleston News & Courier for libel so it was no surprise that the killing of a Confederate officer during the Civil War was resurrected more than a decade after it occurred in order to bring charges against Bowen. Bowen had allegedly hired another soldier to murder their commanding officer who had previously court-martialed Bowen for forgery. When Bowen was set to be tried he hired the best lawyers for his defense. Three of those lawyers were black: William Whipper, Robert Brown Elliott, and Stephen Swails. His only white lawyer was D.T. Corbin. The prosecution’s case fell apart during the trial and Bowen was acquitted.

Around that same time, the legislature established the Criminal Court in Charleston and gave it exclusive jurisdiction over all non-capital criminal cases. The court had two black judges, George Lee and Macon B. Allen, and black lawyers flourished there. Black lawyers handled 63 cases in the Criminal Court between 1873 and 1875. Of those 63 cases 23 were handled by Whipper. Whipper’s record demonstrates his prowess: he obtained six not guilty verdicts, had two new trials ordered, four cases struck, and one quashed.

In Barnwell County Whipper and Elliott were appointed as defense counsel in a murder trial. They not only obtained a not guilty verdict; they also drew the attention of a Charleston newspaper which reported on the “politeness and general good bearing” of the two lawyers. William Whipper appeared in another Barnwell trial in September 1873 and was able to obtain not guilty verdicts on the serious charges of riot and assault and battery of a high and aggravated nature. In Beaufort County, naturally, William Whipper was “the” criminal defense lawyer. For example, during one term in 1873, he won acquittals for clients charged with murder, rape, and assault and battery with intent to kill. In 1876 Whipper won virtually all of his criminal cases; including three murder trials.

The ever present William Whipper joined George Lee in two cases after Lee left the bench: an unsuccessful murder defense and the defense of a white Republican official accused of misconduct that ended in a mistrial.

Whipper remained in Beaufort where he was active in law and politics. He became a bitter opponent of Robert Smalls and achieved some success by finally being elected Probate Judge in 1884. He was denied re-election by a fraudulent vote count then jailed for contempt when he refused to turn over court records to his white opponent. He served as chair of the state Republican Party until 1889. He was a delegate for a second time to a state constitutional convention, this time in 1895. He unsuccessfully defended John Brownfield on murder charges in Georgetown in 1900. He appealed to the S.C. Supreme Court, arguing that blacks had been intentionally excluded from the jury but was unsuccessful. His trip to the U.S. Supreme Court was one of his last court appearances. He died July 29, 1907 in Beaufort.