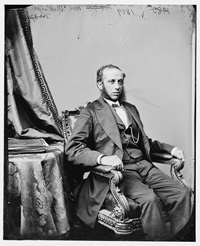 De Large was born in Aiken on March 15, 1842 to free black parents, Jon and Julia De Large. He was educated at schools in North Carolina and Charleston before becoming a barber. That profession provided him a good and steady income. As a member of the Brown Fellowship Society, De Large was among of the elite of Charleston’s free black community. Unlike most free blacks De Large enlisted in the Confederate Army and served in the 16th South Carolina Militia Infantry Regiment. After the war he was a merchant and joined the Republican Party. At the state Republican convention in 1867 De Large advocated limited suffrage, universal public education, the abolition of capital punishment, and assistance for the poor. In 1868 he was an elected delegate to the State Constitutional Convention where he changed his position of the franchise and argued that the right to vote was a universal right of all men. He served in the State House of Representatives from 1868 to 1870. He was admitted to the bar in November of 1871 but did not actively practice law. After leaving the State House, he was one of the State Commissioners of the Sinking Fund in 1870 and then was elected State Land Commissioner. He was elected to Congress in 1870 after campaigning on a pledge of supporting equal rights for all blacks. He served in Congress from March 4, 1871 until January 24, 1873. In 1873 white Republican Christopher C. Bowen successfully challenged DeLarge’s election to Congress. DeLarge’s seat was declared vacant and he was removed from office. He returned to Charleston and served as a magistrate until his death on February 14, 1874. He is interred in Brown Fellowship Graveyard in Charleston.