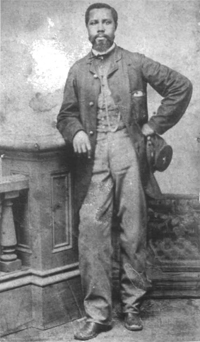 One of six children of Stephen J. and Thurston Maxwell, Henry Maxwell was born free on Edisto Island. His father, Stephen Maxwell owned a store in Charleston. Maxwell attended the Bonneau and Mood Schools which educated free blacks in pre-Civil War Charleston. In 1856, he moved to Michigan and was active in a campaign to obtain the right to vote for blacks in that state. In 1863, he volunteered for the Union Army. He was discharged in 1866 as a first sergeant with the Second colored Light Artillery. He then returned to South Carolina and worked for the Freedmen’s Bureau as a teacher. He served as school commissioner for Marlboro County and was elected to the South Carolina Senate in 1868. He represented Marlboro County in the Forty-Eighth through Fifty-Second General Assemblies (1868–1878). Maxwell was admitted to the bar in March 1872 and practiced law in Bennettsville for a number of years. He resigned from the Senate on October 4, 1877 under the pressure of a post-Reconstruction investigation that was intended to force all black public officials from office. Subsequently he moved his family to Sumter and entered the construction business, until his death there in 1906. His granddaughter Cassandra E. Maxwell became the first African American female lawyer in the state’s history in 1941.