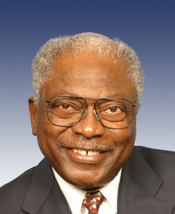 Clyburn was born in Sumter on July 21, 1940. He was graduated from Mather Academy in Camden in 1957, and received a B.S. from South Carolina State University in 1961. After college, Clyburn worked as a teacher and employment counselor. He worked for the South Carolina Employment Security Commission from 1965 to 1966 and was the director, Charleston County Neighborhood Youth Corps and New Careers projects from 1966 to 1968. He then served as the executive director of the South Carolina State Commission for Farm Workers from 1968 to 1971. In 1971, he left the Farm Worker’s Commission to work on the staff of Governor John C. West. He was then appointed the South Carolina Human Affairs Commissioner and served from 1974 to 1992. In 1992, he was elected as a Democrat to the 103rd Congress of the United States and has remained a member of that body ever since. While in Congress, he has served as chair of the House Democratic Caucus (109th Congress) and currently serves as the majority whip. He is a relative of former South Carolina Congressman George Washington Murray.