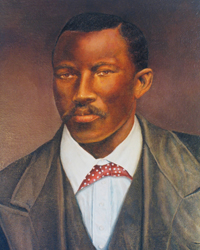 It is believed that Elliott was born in England on August 11, 1842, but he claimed to have been born in Boston and educated in England. The claim that he graduated from Eton College cannot be verified. Nonetheless Brown was both articulate and literate. Arriving in Charleston in 1867 he first worked for the South Carolina Leader, a black owned newspaper. By 1868 he was admitted to the South Carolina bar and soon entered into law practice with William Whipper in Charleston. He would practice across the state and enjoyed great success as a criminal defense lawyer. He served as a delegate to the 1868 State Constitutional Convention where he was one of the strongest advocates for universal manhood suffrage. Legal historian James L. Underwood called Elliott the convention’s “most politically astute delegate.” Elliott was elected to the South Carolina House of Representatives from July 6, 1868 to October 23, 1870.

Service in the legislature was not without peril. During the fall campaign of 1868 a number of black and white Republicans were murdered. Elliott served on a legislative committee to investigate the crimes. Their hearings revealed that the Ku Klux Klan was determined to “kill” all the Republican leaders and “drive them from the state.” As a result the legislature created a state militia to which Elliott was named assistant adjutant general.

In response to the assassinations of State Representative James Martin and State Senator B.F. Randolph, the legislature held a memorial service where Elliott was one of the speakers. In his eulogy, Elliott reminded his fellow black legislators that they might be the next martyrs “to the cause of truth, justice and liberty.” Elliott invoked words similar to Abraham Lincoln’s as he spoke of the career of Martin “it is indeed true that in the midst of life we are in death. We can do no more now than pay a fitting tribute to his memory. Let us dedicate our lives to the carrying out of those principles which he maintained. Let us in the presence of God, resolve that, though we may suffer, we will never recede from them.” Finally, he called for justice, and bluntly pointed out that “the intelligent portion of the people of this State are, at least, indirectly responsible for these diabolical acts.”

Despite the violence, the depressed economic conditions, and the divisions within the Republican Party throughout Reconstruction, the impact of black lawmakers like Elliott was enormous. They helped transform the state as they made civil rights paramount on their agenda. In the first legislative session of 1868, these men wrote and enacted the first civil rights statute in the state’s history. That session, the legislature also ratified the 15th Amendment, and abolished capital punishment except in the case of willful murder.

As a practicing lawyer Elliott also had an impact. He tried major cases in Orangeburg, Aiken, Barnwell, Charleston, Richland, and Georgetown counties. Probably one of the most watched trials in the state’s history occurred in June 1875. The defendant in the Georgetown County murder trial was Christopher Columbus Bowen, sheriff of Charleston County and a former Congressman. Bowen was married to Susan Petigru King daughter of South Carolina’s most famous ante-bellum lawyer James Louis Petigru. Bowen was a controversial figure having been convicted of bigamy and pardoned by President Grant. He had sued the Charleston News & Courier for libel, so it is not surprising that the newspaper help resurrect the killing of a Confederate officer during the Civil War, and Bowen was charged with hiring another soldier to murder their commanding officer. Bowen hired the best lawyers for his defense team. Two of his lawyers were William Whipper and Robert Brown Elliott. The prosecution’s case fell apart during the trial and Bowen was found not guilty.

Robert Brown Elliot was elected to the United States House of Representatives in 1871. Elliott was the second African American from South Carolina elected to Congress. J.H. Rainey preceded him by a few months and Robert DeLarge joined him the Forty-Second Congress in 1871. The 29 year old congressman found both Washington and Congress unwelcoming, but quickly made his mark. Only 10 days after being sworn in March 4, 1871, he made his first speech. His eloquent remarks against an amnesty bill for former confederates drew much attention. Despite press attacks, on March 23, Elliot gave another major speech in support of the legislation designed to put the KKK out of business. His stature had risen so high in Washington that he was the principal orator at the District’s 10th anniversary of the emancipation of the city’s slaves. In 1874, Elliot resigned from Congress and returned to the state to run for the legislature again. He was elected to the legislature and soon rose to be Speaker of the House. In 1876, he ran for South Carolina Attorney General but was denied the office as the white Democrats overthrew the Republican government. With Reconstruction at end, Elliott did not simply quit.

Elliott was joined in 1876 by D. A. Straker and T. McCants Stewart in a new law firm. The three tried practicing in Columbia, Orangeburg, and Sumter. Elliott defended Samuel J. Lee in his corruption trial in 1877, but Lee was convicted. The new firm was short-lived and was defunct in less than two years. Stewart left and Straker became Dean of Allen University law school and then moved to Detroit. Elliott obtained a Federal Treasury post in Charleston. In 1880, he worked for the nomination of John Sherman at the Republican convention. Although Sherman did not get the nomination, Elliott was invited to be the spokesperson for a Southern Black delegation that met with president-elect Garfield that fall. His remarks were of such note that they were reported by the New York Times. Elliott’s return to the national scene was short. He contracted malaria and his wife required surgery; then, in June of 1881, he was assigned to New Orleans by the Treasury and forced to leave South Carolina. He lost that post the next spring. In failing health, Elliott tried to practice in the courts of New Orleans with little success and died at age 42 in the summer of 1884. He is interred in St. Louis Cemetery No. 2 in New Orleans.