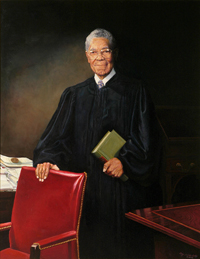 Perry was born August 3, 1921 in Columbia. The son of Matthew J. Perry and Jennie Lyles, he grew up in Columbia and Tuskegee, Alabama. His father suffered from a respiratory injury caused by poison gas attacks during the First World War. Mr. Perry moved his family to Tuskegee so that he could receive treatment at the Veterans’ Hospital there. After his death in 1933, Mrs. Perry moved her family into the home of her father in Columbia, where young Perry attended public schools. He graduated from Booker T. Washington High School and then entered South Carolina State College in Orangeburg. Perry’s education, however, was interrupted by World War II, and he enlisted in the Army before finishing college.

He rose to the rank of sergeant and served in the European theatre. His life was dramatically impacted by an incident that occurred during the war. Following a training exercise he was on a troop train that had to layover in Alabama. Perry tried to obtain something to eat in the segregated train depot but discovered that Italian prisoners of war were allowed in the whites only dining room while black American soldiers were relegated to obtaining food out of a take-out window. After his discharge Perry returned to South Carolina State and completed his bachelor’s degree in 1948.

In 1947 John Wrighten brought a suit to desegregate the University of South Carolina School of Law. In response to this suit the State opened a “separate but equal” law school at South Carolina State. Perry enrolled in the second class of law students to matriculate through the new law school and graduated in 1951. At that time the diploma privilege allowed graduates of the State’s law schools to be admitted to the bar without taking the bar examination. This privilege was removed, however, to create a barrier to admission for graduates of the black law school. Nonetheless, Perry passed the written bar examination on his first attempt. He and his wife Hallie Bacote settled in Spartanburg and he became that city’s first black lawyer since the 1930’s. As a practicing lawyer Perry handled a wide variety of cases but demonstrated a talent for trial work and soon garnered attention through his civil rights advocacy.

By the early 1960’s, Perry was Chief Counsel for the State’s NAACP Chapter. He represented hundreds, if not thousands, of civil rights demonstrators and filed nearly every major civil rights case brought in the State in the 1960’s and 1970’s. His clients desegregated Clemson University, the University of South Carolina, public schools, hospitals, airports, theatres, state parks, restaurants, and every other sort of public facility.

In 1976, President Ford appointed him to the United States Court of Military Appeals in Washington, D.C., where he served until President Carter appointed him to the U.S. District Court for the District of South Carolina in 1979. With that appointment he became the first African American appointed to the Federal bench in the South. He continues to serve a district court judge today. In 2004, the Federal Courthouse in Columbia was named for Perry.