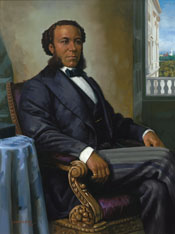 Rainey was born in Georgetown on June 21, 1832 and received limited schooling. He was a barber until 1862, when he was forced to work on Confederate fortifications in Charleston. He escaped to the West Indies where he remained until the war ended. Returning to South Carolina in 1865, he attended the Colored People’s Convention in Charleston. This convention was the first organized public meeting of the state’s black citizens called on the state legislature to reject black codes. These discriminatory laws were enacted nonetheless and soon congressional Reconstruction was imposed on the State. Consequently, a constitutional convention was called for which all male citizens could select the delegates. Rainey was made a delegate by Georgetown County. This convention promulgated the first South Carolina constitution that granted civil rights to all male citizens despite their race. Elected to the State Senate in 1868, he resigned in 1870 after his election to the United States Congress to fill the vacant seat of B. Franklin Whittemore. Rainey was the first black man to be elected to the United States House of Representatives. He was reelected to the Forty-second and to the three succeeding Congresses and served continuously from December 12, 1870 until March 3, 1879. During his nine years in Congress he was a strong supporter civil rights and made major speeches on behalf of the Ku Klux Klan Act of 1872 and the Civil Rights Act of 1875. After leaving Congress, he was appointed Internal Revenue Agent of South Carolina on May 22, 1879. After resigning as Internal Revenue Agent on July 15, 1881, he went to Washington, D.C. where he worked in the banking and the brokerage business until his retirement in 1886. He returned to Georgetown where he died on August 2, 1887, and was interred in the Baptist Cemetery.