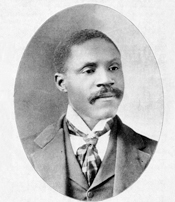 In 1853, George W. Murray was born a slave in Sumter County. Despite a state law against slaves reading and writing, he somehow learned to do both. When slavery was abolished in 1865, Murray became a farmer and, in 1871 at the age of eighteen, he applied for admission to the local all-black school. Amazingly he soon found himself a teacher rather than a student. Three years later in 1874, he began attending the University of South Carolina, during the brief time it was integrated. He studied there until the Wade Hampton-led White Conservatives took political control of the Palmetto State and eliminated all black students from the university.

The white conservatives remained in power until “Pitchfork Ben” Tillman and his farmer forces took the state over in 1890. In these post-Civil War years, anti-black violence was the order of the day, and the vote was increasingly denied to African Americans. Poverty and the noose became the essence of black life in South Carolina.

It was under these conditions that Murray, now a successful farmer, entered the political arena in 1880. He became an official in the Sumter County Republican Party, worked for the U.S. Census Bureau, and served as a delegate to the Republican state convention. Because of his willingness to speak out, he gained the nickname “black bold eagle of South Carolina.” In 1890, he was so well-known that he was asked to give the Emancipation Day address in Charleston, the most important city in the state. Soon after, he became an inspector in the U.S. Customs Service.

In 1892, Murray reached the pinnacle of his political success in the most amazing way. He won election to the U.S. House of Representatives when a Tillman dominated Board of Canvassers settled a disputed election in his favor in order to punish the white conservatives.

As a congressman, Murray was a loyal Republican, but he also tried to establish cooperation with the state’s dominant political faction, the Tillmanites. It did not work. It took a congressional committee to overcome Tillman’s black vote suppression and get Murray re-elected in 1894. When Tillman called a state convention in 1895 to complete the disfranchisement of blacks, Murray fought the convention’s discrimination in federal court, won a temporary injunction, but was reversed at the Appeals and the Supreme Court levels. He then threatened to stop the presidential electoral vote count unless Congress promised to investigate South Carolina’s discriminatory election laws. He had no success in any of these efforts. South Carolina was not to have another black congressman until 1993 in the person of James Clyborn, who is believed to be a descendant of Murray’s.

Though he had met defeat politically, the black eagle continued to demonstrate his boldness. The new state constitution allowed a man to vote if he owned $300 worth of property, so Murray inaugurated a land program for blacks. He bought blocks of land and established a system to allow impoverished blacks to purchase farm land and thus gain the right to vote. He also took out patents on farm machinery he planned to sell to the small farmers.

The land plan seemed to be working, but, in 1905, one of these small black farmers took Murray to Sumter’s Court of General Sessions, arguing that he had cheated him out of some land he was attempting to purchase, land allegedly made more valuable because of a recent agreement between Murray and a railroad company. Under suspicious conditions, the Sumter County Court found Murray guilty and sentenced him to three years on the chain gang. When Murray failed in his appeal, he avoided the brutality of the South Carolina prison system by escaping to Chicago, where he invested in a department store, in which he worked.

In 1909, South Carolina asked Illinois to extradite Murray, but it never happened. He remained in Illinois but regularly visited family and friends in the Sumter area. As long as he did not try to stay permanently and posed no threat to South Carolina white supremacy, the law left him alone.

Murray spent the rest of his life in Chicago, but frequently toured the northern states giving lectures to all-black audiences. He also wrote books on race relations in which he supported 1960s-type “black is beautiful” ideas.

On April 21, 1926, Murray died in Chicago, as he had been born in South Carolina — an unknown. He was buried in the all-black Lincoln Cemetery, but no stone was erected to mark his grave.

George W. Murray is important in history because he was one of the first black congressmen. He was an individual of talent, who tried a variety of political, legal, economic, and literary means to overcome white supremacy, but its power prevailed until it was overthrown in the Civil Rights Era after World War II.