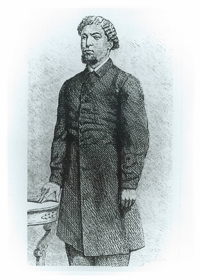 Benjamin Franklin Randolph was born free in Kentucky in 1820. He attended school in Warren County, Ohio, then Oberlin College from 1857 to 1862. Randolph was ordained as a Methodist minister. In 1864 and became a chaplain of the 26th U.S. Colored Troops Regiment on Riker’s Island, New York. His Regiment was quickly transferred to Hilton Head Island. After the war he remained in the state and worked for the American Missionary Association. Soon he was active in politics. He attended the Colored People’s Convention in Charleston in 1865. He was employed as an assistant school superintendent for the Freedmen’s Bureau and edited two black newspapers in Charleston. He was elected to represent Orangeburg County at the Constitutional Convention of 1868. He supported the right to vote for blacks, but would have denied the vote to people who were illiterate or who could not pay the poll tax. His fellow delegates, however, rejected both a literacy qualification and a poll tax. In 1868 he was elected both to the State Senate by Orangeburg County and Chair of the State Central Committee of the Republican Party by the party’s membership. As chairman of this committee he actively represented the party across the state. Randolph served in the Senate for several months before he was killed by a mob of whites while campaigning in Abbeville County in October 1868. He was one of two African American legislators assassinated by whites during the 1868 campaign. He was eulogized in a special session of the State Legislature. Randolph is buried in Randolph Cemetery — which was named for him. He is one of nine African-Americans who served in the General Assembly during Reconstruction buried in that Columbia cemetery.