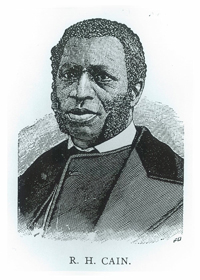 Richard Harvey CainCain was born on April 12, 1825 in Greenbrier County, Virginia (now West Virginia). He moved with his father to Gallipolis, Ohio in 1831 where he attended church affiliated schools. After leaving school, he was ordained as a Methodist Episcopal minister and was a pastor in Missouri. He later resigned because of racism in the denomination and joined the African Methodist Episcopal church. He left the active ministry to attend Wilberforce University in Ohio. When the Civil War came, he and other students tried to enlist but were rejected. Subsequently, he served as a minister in Brooklyn until 1865 when he was sent to Charleston, South Carolina to pastor Emmanuel Church. He managed a newspaper for a short time but was soon immersed in politics. He was elected delegate to the South Carolina Constitutional Convention of 1868, and then served in the State Senate from 1868 to 1872. He was elected to Congress as a Republican and served from March 4, 1873 to March 3, 1875. He was not a candidate for re-nomination in 1874, but was again elected to Congress in 1876 and served from March 4, 1877 to March 3, 1879, but was again not a candidate for re-nomination in 1878. While in Congress, Cain was a strong advocate for civil rights and helped obtain passage of the Civil Rights Act of 1875. After leaving Congress, he was appointed a bishop of the African Methodist Episcopal Church in 1880 and served until his death in Washington, D.C. on January 18, 1887.