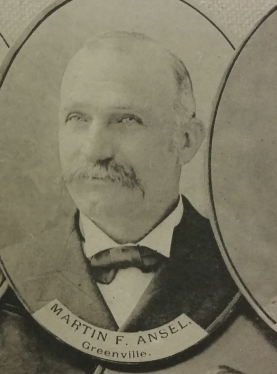 Martin Ansel was admitted to the Bar in 1870. He practiced in Franklin, North Carolina, and later in Greenville, South Carolina. He was first married to Ophelia Anne Speights, who died in 1894, and, in 1898, he was married to Mrs. Addie H. (Hollingsworth) Harris, who died in 1937.

He served as Governor of South Carolina, was a member of the House of Representatives, Solicitor of the Eighth Circuit and Judge of the Greenville County Court.

Deeply interested in education, his efforts resulted in the establishment of 150 additional high schools in South Carolina while he was Governor.

“Who can furnish a career more interesting, more helpful or more inspiring of true worth and honest endeavor than the well-poised, self-trained, mild-mannered man who held the reins of government for four years.”