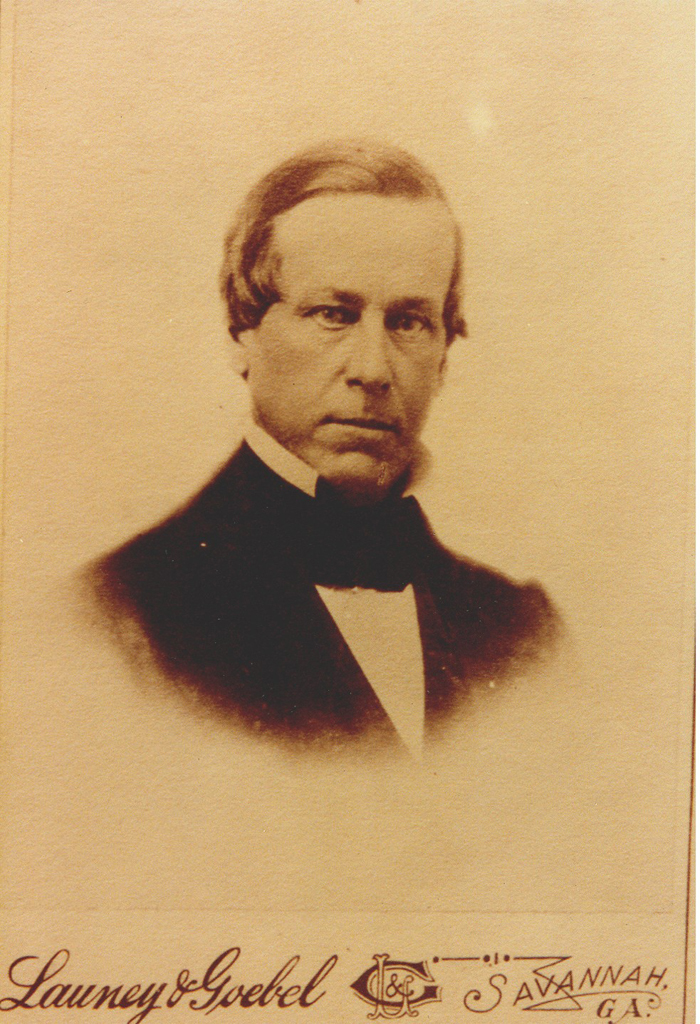 William Ferguson Colcock, son of Charles Jones Colcock, was born in 1804, in Beaufort, South Carolina. He received his early education at home, through the services of private tutors (1) and then attended a classical preparatory school in Charleston, run by Martin Luther Hurlburt. In 1823, he graduated from the South Carolina College, first in his class. (2) Daniel Walker Holllis, in his history of the University of South Carolina, said “The small but able class of 1823 included future Congressman William F. Colcock, long prominent in South Carolina politics, and future Chief Justice Franklin Israel Moses.” (3) Colcock was admitted to the Bar in 1825 and began his practice in the Beaufort District Court at Coosawhatchie. (4) In 1834, he was elected to the South Carolina General Assembly as representative from Prince William Parish. The Greenville Mountaineer wrote of him: “He commands in a very high degree the respect of the House. As a debater, he speaks well, fluently, and always on the subject. He is rather small and possesses quite a youthful appearance. His manners are those of a polished gentleman.” (5)

In a memorial tribute, Joseph Daniel Pope, the first Dean of the Law School at the University of South Carolina, described the success of his long time friend, W. F. Colcock, at his chosen profession.

He at once rose into a lucrative practice; in the Court of Sessions, particularly, he was constantly engaged for the defense, and he jumped from one jury to another, wringing from them successful verdicts in favor of his clients. The truth is, the young man was pleasing and popular; he aspired to the name, the honors and the emoluments of a successful advocate; and these he undoubtedly won. … . It cannot be said of him that he was a profound or scientific jurist. … . But this much can be truly said of him: in the Court House, in the heat of the conflict, in the conduct of his case, he was the equal of any; he had for ready use and at his fingers’ ends the rules of evidence; he was skilful [sic] and careful in putting his case upon paper according to the subtle forms that then obtained; he understood and was readily familiar with the rules of Common law practice; and armed with these weapons he was often the master of an adversary who was his superior in Black Letter lore. Mr. Colcock was a sound equity lawyer, but we think he preferred personally, the sharp, subtle, and logical refinements of the common law and certainly preferred the animated conflict of the Jury trial. And naturally so; because before the jury he was well-nigh irresistible … . (6)

His skill as an attorney was admired even by opposing parties. He is mentioned in several entries in the journal of Thomas B. Chaplin (1822–1890), owner of Tombee Plantation. (7) Chaplin had been sued and the plaintiffs were represented by W.F. Colcock, William Ferguson Hutson, and James L. Petigru. The entry for February 27th reads: “Friday. Rained nearly all day, & very cold. Our case was called just before sunset, 2 bills were read & the court adjourned. Baker [the plaintiff] looks a little alarmed. His strong man Hunt [Benjamin Faneuil Hunt] has not come to defend him. He will have to trust to Colcock & Hutson.” (8)

The next entry, for February 28th, describes the arguments of counsel at the court in Gillisonville.

Our case took up the whole day from 10 o’clock until dark. It was very interesting. Baker was completely used up, and looked like a sheep-stealing dog. Pope [Joseph Daniel Pope], in his speech, called him a good for nothing bankrupt druggist from Broad Street, and Baker looked as though he could eat him up. Hutson spoke first, followed by Pope, Colcock & Treville. The three latter made splendid speeches. Colcock did well but he had a bad case, the evidence was too much against his client. The case will no doubt be decided in our favor. The judge was heard to say that his mind was made up before Baker’s side was heard, after hearing the bills & answers made, & the evidence given in. I suppose we will get the written decision in a few weeks. (9)

In 1841, Colcock was elected Speaker of the House and remained Speaker until he was elected to the United States Congress in 1848. (10) He served in Congress for two terms, during which time he became a regent of the Smithsonian Institution, serving on the board with two future Presidents, Millard Fillmore (USA) and Jefferson Davis (CSA). It was an “appropriate appointment based on his consistent support of educational projects.” (11) In 1853, he became Collector of the Port of Charleston, an office he held under the Federal and Confederate governments. (12) Possibly because Colcock had served for many years on the Education Committee of the House, he was appointed in 1853 to a commission to investigate and report on the state of South Carolina College. (13) Several years later, he was championed as a possible president of the college by the Charleston Mercury, but the position was offered to Augustus Baldwin Longstreet. (14)

After the conclusion of the Civil War, in 1866, he retired as Collector and returned to the Beaufort area to practice law. The U.S. Government sued him on his bond as Collector, for the recovery of fees collected during the conflict. The entire Bar of Charleston offered their services in his defense. (15) He opened an office with his cousin and son-in-law, Charles Jones Colcock Hutson, in 1866, with an office at Gillisonville Court House, practicing under the firm name of Colcock and Hutson. Four years later, Colcock’s son, Cornelius J. Colcock joined the firm. In 1872, the firm of Colcock and Hutson was dissolved, with W.F. Colcock and Cornelius Colcock practicing under the name Colcock and Son, and Charles J.C. Hutson practicing under his own name. He died in 1889, at home, at Ocean plantation.

William Ferguson Hutson, cousin of William Ferguson Colcock, was born in 1815, at Jericho Plantation, his family’s lands on the Combahee River, outside of McPhersonville, South Carolina. He was a prominent lawyer in Beaufort district, with an office in Pocotaligo. (16) He appeared in court often with his cousin, W.F. Colcock, in the years before the Civil War. He was among the attorneys mentioned in Thomas Chaplin’s journal.

He was a member of the “Secession” convention of 1860, the principal author of the Ordinance of Secession, (17) and a signer of the Ordinance. He served as a colonel in the Reserves during the Civil War. Although McPhersonville was largely destroyed by Sherman’s army, W.F. Hutson’s law office may have survived. His son remembers seeing “the bullet holes in my father’s law office.” (18) For a while, he owned Inverness Plantation, which he purchased from his cousin, W.F. Colcock, (19) but his “law practice was more fruitful of dollars than the plantation and at last he sold it [the plantation] … .” (20) Hutson moved his family to Orangeburg ‘shortly after the close of the Civil War, from his home in the Low Country about half way between Charleston and Savannah.’ (21) He died there in 1881.