John Colcock was born in 1744, the son of a sea captain who settled in Charleston. He was admitted to the practice of law, most likely having read law with a trained lawyer, in the Court of Common Pleas at Charles Town on February 12, 1767. (1) He was elected “Secretary and Correspondent” of the Charlestown Library Society in January, 1769. (2) He is mentioned by George Rogers in his Generations of the Bar as one of the first lawyers to make a reputation outside of Charleston. (3) His most famous client was Col. Isaac Hayne, who was executed by the British as a traitor. Col. Hayne had married Elizabeth Hutson, sister of Richard Hutson. No doubt the two lawyers were well acquainted.

Col. Nisbet Balfour, the British commandant of Charlestown, and Lieutenant Col. Lord Rawdon, commander of British forces at Camden and the South Carolina frontier, determined early that Hayne must be executed as an example to the rebels. After a summary trial, the two issued a joint statement sentencing Hayne. When notified of the sentence Hayne sent for Colcock, who argued vigorously for his client.

[Colcock] asked that the ruling be overturned because Hayne had no knowledge of the intent of the board, because no one could be sentenced without a trial except a spy, and because Hayne’s guilt had not been proven. The only reaction to this from the officers in charge was the statement that his sentence was not due to a board of inquiry ruling but by virtue of the authority with which the commander-in-chief in South Carolina and the commanding officer in Charlestown were invested. (4) 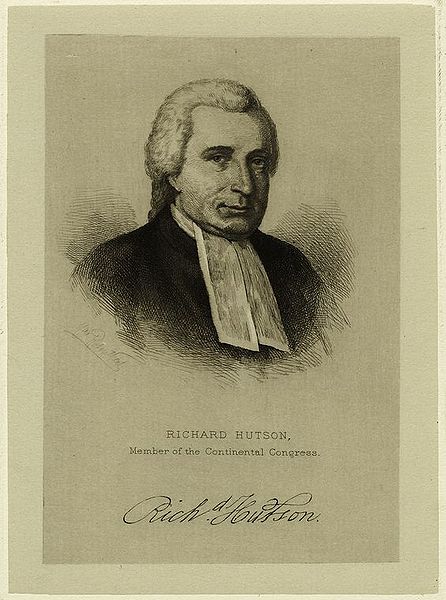 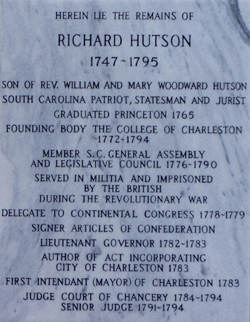 Richard Hutson, born in 1747, was one of the three judges of the first Court of Chancery established in South Carolina. He was born at Yemassee, then known as “Indian Lands.” His father, William Hutson, had studied law at the Inns of Court, but had decided not to enter the profession. The elder Hutson came to South Carolina and became the first pastor of Stoney Creek Presbyterian Church in the Beaufort district (now McPhersonville). In 1756, Richard moved to Charleston with his parents. He attended Princeton College, and after his graduation in 1765, studied for and was admitted to the Bar in Charleston. He was a member of the South Carolina General Assembly from 1776 to 1790. During that time, he served as a delegate to the Continental Congress, where he was a signer of the Articles of Confederation. He was Lieutenant Governor of South Carolina from 1782 to 1783. He was the author of the act incorporating the City of Charlestonin 1783, and was elected the first Intendent (Mayor) of Charleston the same year. In 1784, he was elected Chancellor, serving until his death in 1795. He served as a member of the state Constitutional convention in 1788, which adopted the Federal constitution. (5) From 1791 to 1794, he was Senior Judge. (6) He never married and had no children, but his niece, Mary Woodward Hutson, married Charles Jones Colcock.