Named for Derry Gillison, Coosawhatchie shoe manufacturer, the village was the seat of government for Beaufort District, from 1836 to 1868. An impressive square was laid out in the center of the village as the location of the court house, the jail, and the gallows. The courthouse and other buildings were burned in 1865 by Union troops. 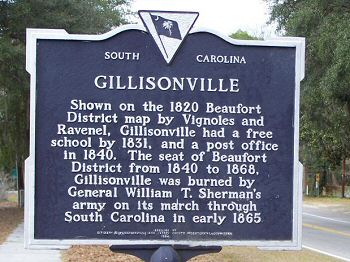 In 1868, Beaufort once more became the government seat. Gillisonville later became a part of Hampton County, then of Jasper County. Colcock & Hutson had offices in Gillisonville and Pocotaligo.