The Colcocks and Hutsons practiced in courts in Charleston, Beaufort, and Hampton Counties. John Colcock was admitted to the Bar in Charleston in 1773 and later established a practice in Beaufort District. The courts of the province of Carolina met in the first statehouse, in Charleston, completed in 1753. (1) Richard Hutson, as one of the first Chancellors, would have presided over the Court of Equity in that building. In 1788, the statehouse was destroyed by fire. What remained of the building was declared to be strong enough that it could be reconstructed. Since the capitol was to be moved to Columbia, the old statehouse building became the Charleston County Courthouse. (2) 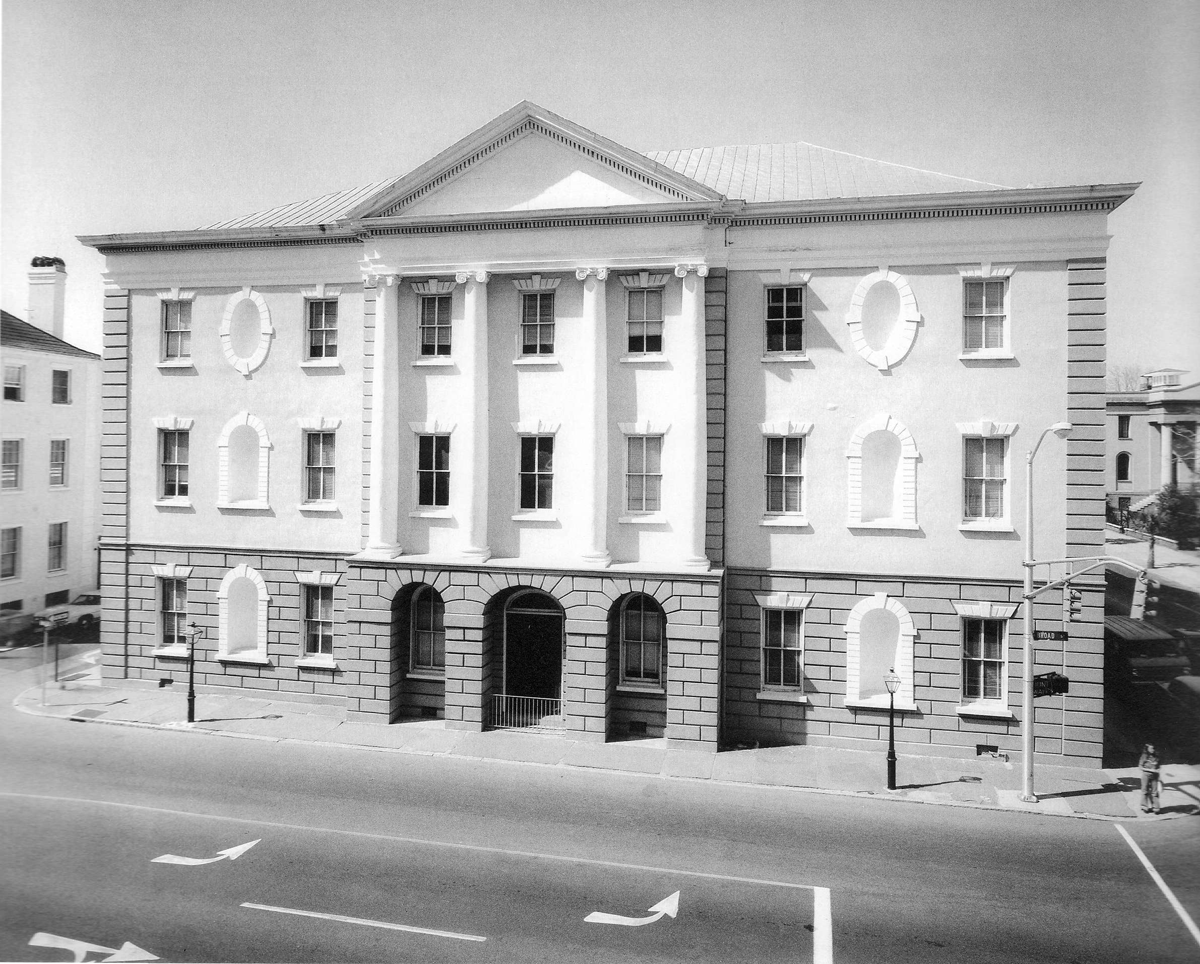 The courtroom saw the periodic appearance of members of the U.S. Supreme Court who travelled the southern circuit to interpret the laws of the new federal constitution. Associate justices such as James Iredell, Thomas Johnson, Alfred Moore, Bushrod Washington, James Wilson, and William Cushing, and chief justices Oliver Ellsworth of Connecticut and his predecessor, South Carolina native John Rutledge, undertook extensive journeys each fall in order to hear cases with district judges in federal courtrooms in Richmond, Raleigh, and other cities before making their way to Charleston. (3)

Charleston was booming. Charles Fraser describes the courts around 1800 in his memoirs.

The extensive commercial business of Charleston at that time opened a wide field of litigation. Our courts were constantly employed in heavy insurance cases — in questions of charter party, foreign and inland bills of exchange, and in adjusting foreign claims. There was also a good deal of business in admiralty, and, occasionally, a rich prize case. Then again, new questions were continually arising out of the then new acts of our Legislature. Points now settled were then open to construction, involving considerable amounts of property. Titles of land were not adjusted, or their limits ascertained; and, finally, Charleston was then divided into two strongly defined parties, to one or other of which every citizen belonged — that of debtor or creditor.(4)

It may have been because the courts were so busy that the actual procedures were somewhat casual. He offers this evaluation of the conduct of litigation in those very active Charleston courts. “I have been told that the spirit of mutual accommodation at the bar, was such as to lead to great irregularity. For often, when a case was called in court, the pleadings were not made up or filed, and had no other existence than in the mutual understanding of the opposing lawyers.” (5) A business directory from 1855 contains an explanation of the jurisdiction of the various courts that sat in Charleston, and the times during which they were holding court.

The Courts of Common Pleas and General Sessions had “original jurisdiction in all civil cases where legal rights are involved (except in matters of contract, where the amount is $20 or under) and in all criminal cases, affecting free white men; and appellate jurisdiction, in all appeals from Magistrate’s Courts, and in appeals from the Court of the Ordinary; in all cases except in matters of account. The times for holding the court for Charleston district, are the first Monday in May, to sit six weeks, and the fourth Monday in October, to sit four weeks,” (6)
…
The Courts of Equity encompassed “all matters belonging to a Court of Equity, as #7contradistinguished from a court of law.’ In Charleston, the court term was held ‘on the first Monday in February, to sit six weeks, and on the second Monday in June, to sit four weeks.” (7)
…
The Courts for the Correction of Errors consisted “of all the judges in law and equity [convened], to try constitutional questions, or questions where the law and equity courts are divided, which are referred thereto by either of the courts, are held at such times, during the sitting of the Court of Appeals, as the chancellors and judges may appoint.” (8)

Because of its central location, Coosawhatchie had become the seat of government for Beaufort District in 1788. The principal local court was the Court of Common Pleas and General Sessions, established by the Act of 1796. By 1810, the local court of equity had also moved to Coosawhatchie. In 1817, the South Carolina state Senate set aside twelve thousand dollars to build a new courthouse. Probably designed by noted English architect William Jay, who was practicing in Savannah and Charleston at the time, the new structure was erected in 1819. “The Coosawhatchie Court was two stories high, forty feet in width, and fifty feet in length with a glazed pan-tile roof. The stairs were located inside the front portico and the second floor courtroom could be shut off when not in use.” (9)

Jay was instructed to come up with a set of stock plans that could be used to build courthouses and jails in all South Carolina counties. When Robert Mills took over William Jay’s position, he inherited those plans and added his own modifications. (10) The court was relocated to Gillisonville in 1840 and then to Beaufort in 1868. William Ferguson Colcock and William Ferguson Hutson would have appeared in those courts.

Hampton County was created out of Beaufort District in 1878, in large part due to the hardship the removal of the county seat to the city of Beaufort imposed on the citizens of the northern part of the district. So great was the burden of traveling to Beaufort to the court that it amounted, in the eyes of the citizens, to a denial of justice. (11) The first term of court was held in the new Hampton County courthouse in January, 1879. (12) Charles Jones Colcock Hutson and Cornelius J. Colcock would, no doubt, have appeared in the Hampton County courthouse. 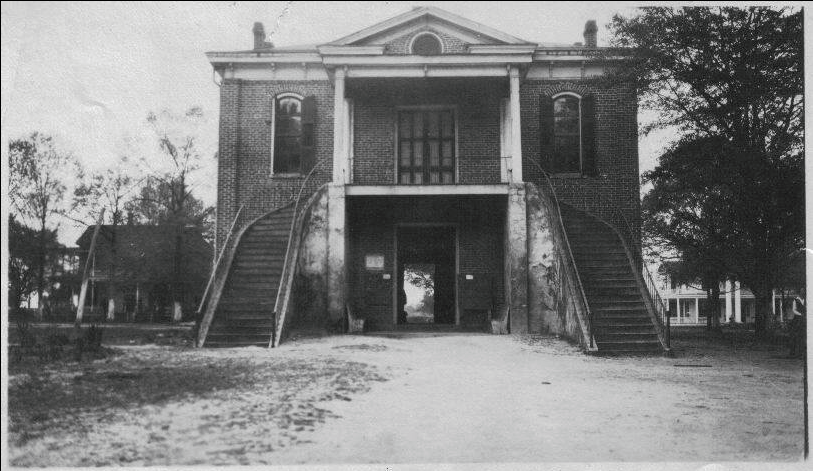 This charming description of the opening day of court around 1850 in Newberry County gives us a glimpse of what it was probably like in Coosawhatchie and other county courts of the time.

Let us in imagination go back nearly a half a century; pass through the front door, with its massive shutters thrown wide open — fit emblem of a Court of Justice — and look upon the scene within.

It is the first day of the term. The sheriff, Gen. H.H. Kinard, standing at the railing of the portico, has just made, in a clear ringing voice, the following announcement:

“Oyez! Oyez! All manner of persons having business in the Court of Common Pleas and General Sessions for Newberry District, are required to give attendance, for this Honorable Court now sits.”

Judge O’Neall, in the vigor of his manhood, and arrayed in a flowing black silk robe is seated on the bench, his eyes glancing over the assembly. At the desk in front of, and just beneath the Judge’s seat stand the clerk, Y.J. Harrington, and by his side sits his life-long friend, busily engaged in writing; the assistant clerk, John S. Carwile. At the table opposite the clerk’s desk, we see the tall and spare, but very erect figure of the solicitor, James J. Caldwell, who is administering oaths to witnesses in order to send them before the grand jury. … .

The grand jury having been organized and furnished by the solicitor with a number of indictments for investigation, Judge O’Neall proceeds at once to deliver his charge. He speaks in a clear, sonorous voice, which can be distinctly heard out upon the Public Square. The moment he begins to speak there is a rush by the crowd outside to gain admittance in to the Court-room. This produces a temporary disturbance, which is quickly repressed by the imperious voice of the sheriff. The Judge proceeds and the people listen in profound silence and with unflagging attention, as he points out to the jury the far-reaching power and authority with which they are clothed, and boldly and earnestly adjures them to be diligent in the discharge of their duties.

The grand jury having retired; the petit juries are speedily organized. Now while the solicitor is still engaged in swearing witnesses to go before the grand jury, in order that other bills may be given to them, Judge O’Neall at once takes up the business of the Common Pleas, by passing orders and by rapidly disposing of cases on the Summary Process and Enquiry Docket.*

Here we see the flexibility of an admirable judiciary system, which enables a judge to turn at any time from one side of the Court to the other, as the business may demand. The court proceeds with the utmost dispatch. No tedious delays are allowed; and woe-betide the lawyer, officer of Court or witness who is not promptly in his place. (13)

*Cases on the Summary Process Docket were heard at the first term after suit was brought, and decided by the Judge; except in rare instances where a jury was demanded by one of the parties to the suit. The Summary Process docket embraced all cases in which the sum involved was not less than $20 nor more than about $85. The Enquiry Docket embraced all cases, above the Summary Process jurisdiction, in which no defense had been put in. When, however, leave was obtained during the session to put in a defense the case was transferred to the Issue Docket. If there was no defense the case was referred to the clerk, who assessed the damages and wrote a decree for the amount on the Declaration, now called the Complaint.