The crossroads village of Grahamville, less than a mile from present Ridgeland, had its beginning as a village of summer homes for the planters of upper St. Luke’s Parish some time after the Revolution. “Colcocks, Heywards, Duponts, Huguenins, Gillisons, Bolens, Cuthberts, and others of the old planter families had cottages there.”(1)

There is a tradition that President Washington stopped in Grahamville briefly, and spoke to the assembled crowd from the steps of one of the earliest homes. Court was held in Grahamville on occasion. Most of the buildings in the town were burned by Gen. Sherman’s troops in 1865.

This charming little church began as a chapel-of-ease for the planters who made their summer homes in Grahamville.(2) It grew and in 1834 was incorporated as an independent parish unit. The current building, which is still in active use, was completed in 1859. 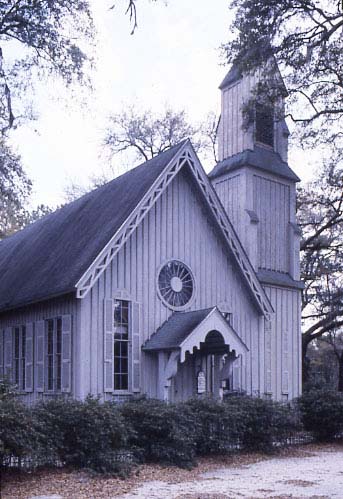 During the Civil War, it escaped destruction because it was being used as headquarters for the Union army as they moved through Beaufort district, though the interior was desecrated. William F. Colcock was a vestryman and Charles C.J. Hutson was a lay reader here.​

Ridgeland, located on the highest spot between Charleston and Savannah, began as a station on the rail line, when the town of Grahamville refused to allow a station to be built there. Although the community had been known as Gopher Hill since it was first settled, the railway company chose the name Ridgeland for its new station, as being more dignified. Ridgeland later became the county seat of Jasper County. The first attorneys to open offices in Ridgeland were Cornelius J. Colcock and G.M. Buckner.(3)

Ocean Plantation, outside of present day Ridgeland, was originally owned by Thomas Drayton of Charleston in the late 1700’s, and used as a summer residence. It was described by a visiting English writer in his travel memoirs.(4)

To form an idea of Ocean Plantation, let the reader picture to his imagination an avenue of several miles, leading from the Savannah (and Charleston) road through a continued forest to a wooden house, encompassed by rice-grounds, corn and cotton-fields. … . the view of the eye bounded by lofty woods of pine, oak and hickory. The solitude of the woods I found at first rather dreary; but the polite attention of an elegant family, a sparkling fire in my room every night, and a horse always at my command, reconciled me to my situation; … . 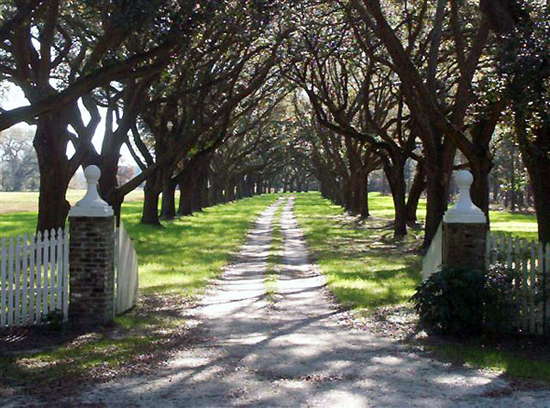 The Entrance to Ocean Plantation

Ocean Plantation was owned thereafter for many years by the Hutson and Colcock families. It was William Ferguson Colcock’s home at the time of his death. After it passed from the hands of the Colcock family, it became known as Log Hall. That plantation, along with Turkey Hill Plantation, was bought in 1939 by Jeremiah Milbank, a wealthy northern industrialist. When the Milbanks acquired Log Hall Plantation, they could find no evidence of any former dwelling.(5) Turkey Hill and Log Hall are now a hunt club in Jasper County.