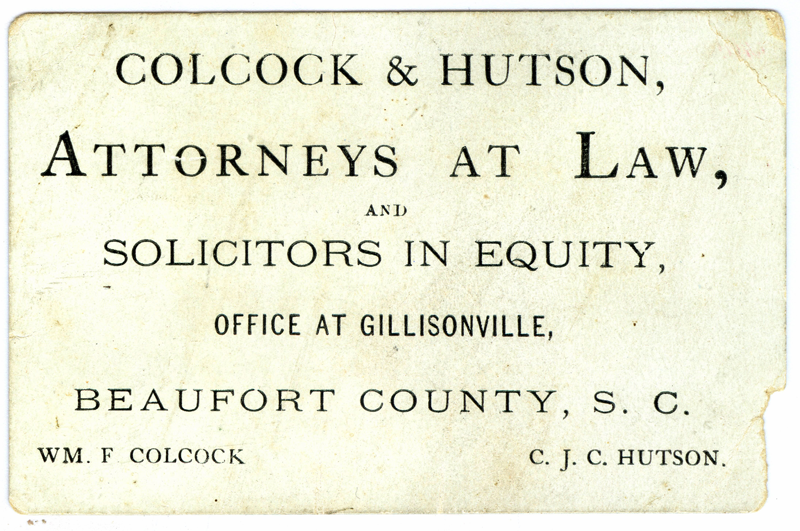 To celebrate the 25th anniversary of the South Carolina Legal History Collection in 2009, the Coleman Karesh Law Library mounted an exhibit exploring the lives and law practices of five generations of South Carolina lawyers. In August of 2007, the Law Library received a donation of 419 books that had been part of the library accumulated by five generations of Colcocks and Hutsons, lawyers who lived in Beaufort, Jasper, and Hampton Counties from 1744 to 1939. The donor, Charles Cook, had been given the books by a family friend, Miss Dollie Hutson, forty-five years earlier, in the summer of 1962. Mr. Cook was the son of a Presbyterian minister who was serving two churches in the lowcountry, one of them Stoney Creek Presbyterian Church in McPhersonville, SC. When Miss Hutson, a member at Stoney Creek, learned that the younger Mr. Cook was about to enter law school, she decided to give him the books that her great-great-grandfather, great-grandfather, grandfather, father, and brother had used in their own law practices. The books had survived several wars and a great depression. While Mr. Cook never used the books in his own practice, which included fourteen years as Reporter of the South Carolina Supreme Court, he kept the library intact and his donation provides a vehicle for examining the practice of law from the eighteenth, through the nineteenth, to the early twentieth century.

The Coleman Karesh Law Library would like to thank the following people and institutions for their contributions to this exhibit.