Secondary sources  are the encyclopedias, treatises, ALR annotations, journal articles, and restatements that you consult to better understand the law and to find primary authority. Secondary sources are always persuasive.

Primary authority is the federal law: constitutions, statutes, administrative regulations, and court decisions.  Primary authority may be mandatory or persuasive, depending upon two factors: jurisdiction and hierarchy of authority.

Jurisdiction
A federal court will apply the law in its jurisdiction. For example, a decision from a U.S. District Court in Georgia is primary authority because it is case law. However, it is not binding/mandatory on a U.S. District Court for the District of South Carolina. It is only persuasive. A South Carolina court may be persuaded by a Georgia decision, but it is not required to follow precedent from another jurisdiction.

You may visit the United States Courts website to read more about the role and structure of the federal courts.

Questions to Ask When Researching a Federal Issue

Weight of authority is important when researching a federal issue. If the U.S. Supreme Court or the Court of Appeals in your circuit (e.g., Fourth), has ruled on a point of law, that opinion is mandatory authority. However, if you can distinguish the facts in the controlling case from the facts in your client's case, you might persuade the court to follow the reasoning of a lower court or a court from another jurisdiction that applied the same law to facts more similar to yours.

If the U.S. Supreme Court or  Court of Appeals in your federal circuit have not ruled on a particular legal issue, all cases on point (applying the applicable law to similar facts) are important, because they could have value as persuasive authority.

When researching cases on an issue of federal law, ask yourself the following questions included in the pyramid below, from top to bottom: 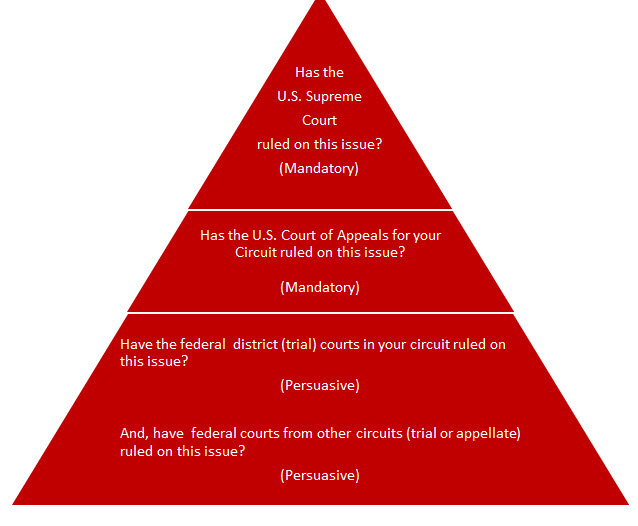