To understand the legal research process, one must first understand how the legal system works. The United States has three systems of government, federal, state, and tribal, each of which has its own set of laws. Elizabeth Reese. The Other American Law. 73 Stan.L.Rev. 555 (2021) The four sources of federal and state law are (1) constitutions, (2) statutes and ordinances, (3) rules and regulations, and (4) case law. Beyond the information in this unit, we will not be discussing or studying any tribal law this year, but you should be aware that their laws come from these same four (4) sources, but also come from a fifth (5) source - customs and traditions.

Constitutions are foundational to our legal systems. Federal and state governmental authority flows from the United States Constitution and the state constitutions. Tribal powers are inherent rather than derived from the federal government and Tribal nations possess all powers of a sovereign government except as limited by lawful federal authority. The federal government has limited inherent tribal authority by treaty, by statute, and in some instances, by judge-made federal common law. Cohen's Handbook of Federal Indian Law. § 4.02. (Neil Jessup, ed, 2019). The United States Constitution is the supreme law of the land, and no laws, state or federal, may violate it. Each state has its own constitution. The laws of a particular state may not conflict with the constitution of that state or with the U.S. Constitution.

The Separation of Powers doctrine divides governmental authority among three branches: Legislative, Executive, and Judicial. Some tribes have adopted this three-branches of government system, but not all. 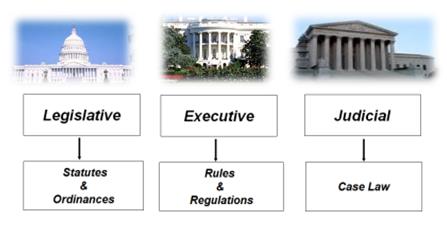 Federal, state, and local legislative branches are each responsible for enacting their own laws.

Federal and state executive branches are responsible for enforcing and implementing federal or state laws.

This is accomplished when Congress or state legislative bodies give federal or state administrative agencies the power to write rules and regulations to implement and enforce the laws they pass.

For example, when the U.S. Congress passed the Family and Medical Leave Act, it gave the U.S. Department of Labor the responsibility and power to write regulations to enforce its provisions.

Federal and state court systems interpret federal and state statutes and regulations and determine their constitutionality and the applicability of the law to the facts.

For example, the federal court in Miller v. AT&T Corporation, 250 F.3d 820 (4th Cir. 2001), interpreted (1) a federal statute enacted by Congress, known as the Family and Medical Leave Act, and (2) related federal regulations created by the Department of Labor.

Second, court decisions can announce new principles of law where no statute or regulation applies, creating a body of judge-made law called common law, a subset of case law. For example, the elements required to recover for claims such as negligence or fraud in South Carolina are determined by case law, not statutes. This means negligence and fraud are common-law claims.

Third, court decisions create case law by applying the law (whether common law, constitutional law, statutory law, or regulatory law) to new situations. Even when a court is not clarifying legal language or adding a new principle of common law, each new judicial opinion adds to the body of case law by providing an example of how the law applies to an individual case.

The principle of stare decisis, which is Latin for “let the decision stand,” means that judges follow prior court decisions when deciding cases that come before them with the same legal issue, meaning (1) governed by the same law and (2) having similar facts. A binding prior court decision is known as precedent.