A Quick Primer on the World's Legal Systems

Civil law systems have their origin in the Roman legal tradition.  Civil systems vary widely, both in procedure and substantive law, so conducting research on a particular nation's civil law system should include looking at that nation's specific system of law, but they do have some trademark characteristics.  Nations with civil law systems have comprehensive, frequently updated legal codes.  Most importantly, case law is a secondary source in these jurisdictions.  France and Germany are two examples of countries with a civil law system.

Common law systems, while they often have statutes, rely more on precedent, judicial decisions that have already been made.  Common law systems are adversarial, rather than investigatory, with the judge moderating between two opposing parties.  The legal system in the United States is a common law system (with the exception of Louisiana, which has a mix of civil and common law).

Customary law systems are based on patterns of behavior (or customs) that have come to be accepted as legal requirements or rules of conduct within a particular country.  The laws of customary legal systems are usually unwritten and are often dispensed by elders, passed down through generations.  As such, customary law research depends greatly on the use of secondary sources.  Oftentimes, customary law practices can be found in mixed legal system jurisdictions, where they've combined with civil or common law.

Religious legal systems are systems where the law emanates from texts or traditions within a given religious tradition.  Many Islamic nations have legal systems based in whole or in part on the Quran.

What Legal System Does "Country X" Have? 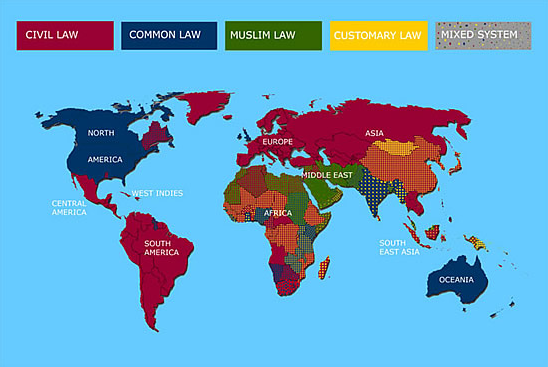 When you begin your research, you may not know what sort of legal system the nation you're researching has.  The quickest way to figure out what sort of legal system is in place in the nation you're researching is to visit the University of Ottawa's JuriGlobe: World Legal Systems.  Using the Table of Contents on the lefthand side, select Legal Systems Classification.  There, you will find an alphabetical index of nations with the corresponding legal system.

To learn more about a specific country's legal system, try looking at the Modern Legal Systems Cyclopedia.  This multi-volume looseleaf set is available in print (K48 .M62) as well as through HeinOnline.  Organized by country, it gives an overview of the political and constitutional background, the sources of law, the courts of law, court procedure, and the legal profession within each country, as well as other helpful information.

Another excellent resources for looking up information on the legal system in a particular country are the Foreign Law Guide and GlobaLex.  A subscription database available through the library, it provides information on the legal history of each country and how the judicial system in each nation works.  Each country's entry allows lists the important sources of law--codes, gazettes, court reports--and lists important pieces of legislation by subject.