4. by subject using an index; and

1. Citation
The easiest way to locate a court opinion is by citation.

Case citations contain the case name, volume, reporter, and page number where the case begins. Once you have the citation for that case, you can locate it by the designated volume and page number of either the official South Carolina Reports (S.C.) or the South Eastern Reporter 2d Series (S.E.2d).

You may know the name of a South Carolina case, but not it's citation.

3. Word or Phrase
The South Carolina Digest also includes Words and Phrases volumes that list words and phrases alphabetically, along with citations and summaries of South Carolina cases that interpret their meaning or application.

For example, the Russell and Howard cases cited above both involve family members contesting a will based on a claim of undue influence. You might find either or both of these cases listed in the Words and Phrases volume of the South Carolina Digest under the phrase "undue influence."

West summarizes the issues in each case published in its reporters and assigns each summary, called a headnote, at least one topic and key number (subtopic). West adds these headnotes to the beginning of the official opinions (see the Matter of Estate of Smith case below) and publishes them by topic and key number in West digests like the South Carolina Digest and the South Eastern Digest.

All print digests include Descriptive Word Index volumes to help you find cases by subject. Under the topic "Wills" in the Descriptive Word Index to the South Carolina Digest you will find the subtopic "undue influence." That subtopic will be assigned a key number. You can then consult the digest volume that contains the topic (Wills) and key number assigned to the subtopic "undue influence" to find headnotes with citations to South Carolina cases addressing will contests and undue influence.

In addition to using a digest's Descriptive Word Index, you may also use the headnotes in one good case to find West Topics & Key Numbers assigned to your legal issue (e.g., wills and undue influence). Perhaps you find a case cited in an article or book, the annotations to a statute, or in another case.  Once you identify a topic and key number from that case, you can go directly to that topic and key number in the South Carolina Digest to find more cases on that legal issue.

For example, in the Matter of Estate of Smith case below headnotes 1 though 4 are assigned the topic Wills and different key numbers for the subtopics they represent. Headnote number 2 reads:

For a will to be invalidated for "undue influence," the influence must be the kind of mental coercion which destroys the free agency of the creator and constrains him to do things which are against his free will, and that he would not have done if he had been left to his own judgment and volition.

To read more South Carolina cases on this test for invalidating a will due to "undue influence," you can consult the South Carolina Digest under the topic Wills, key number 155.1. 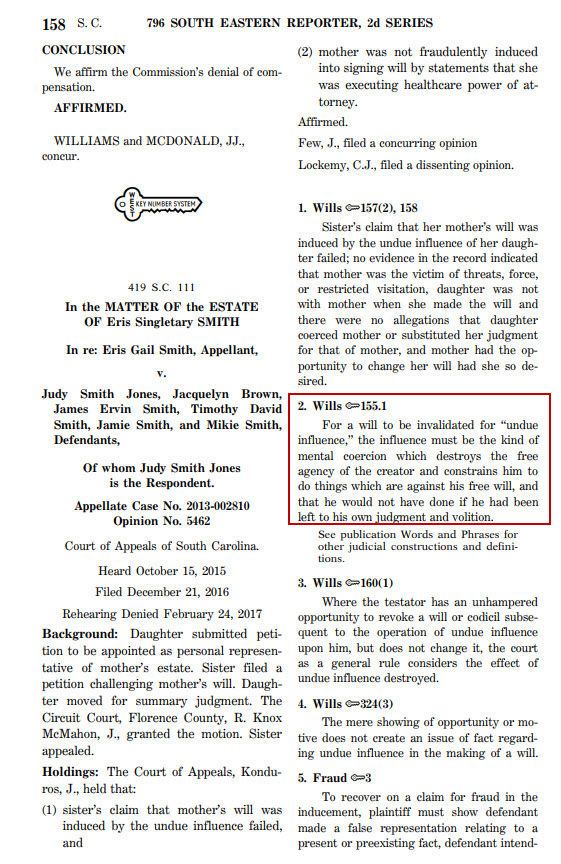 State appellate courts may provide several years of opinions on their websites to browse and search for free, but without editorial enhancements like case summaries and headnotes added by publishers like West and LexisNexis. 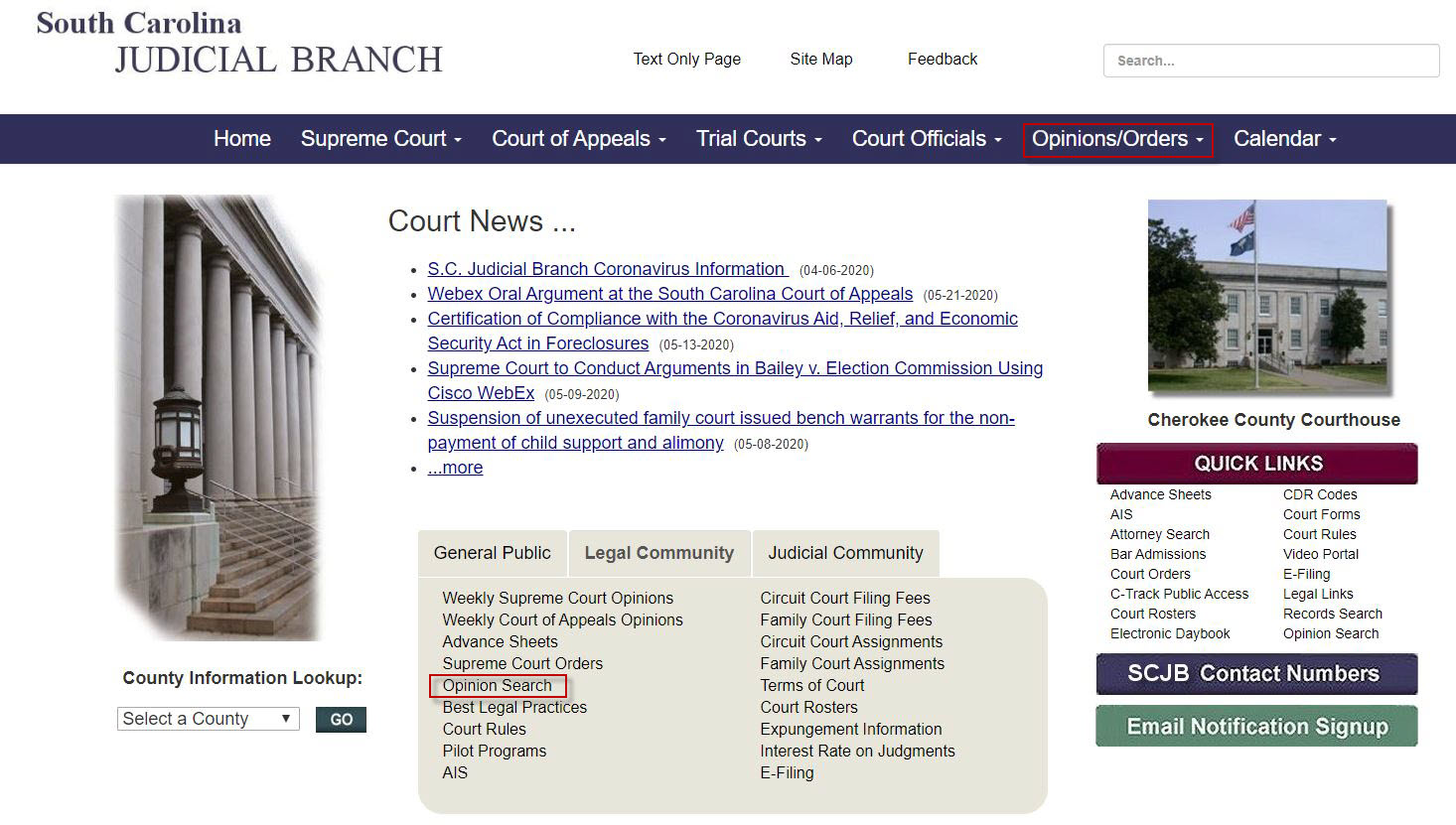 There are five search options: by case number, by court, by the appellate court judge who wrote the opinion, by the judge who decided the case at trial, and by a text search of all published opinions, which could include the case name.

Google Scholar is another free resource for searching South Carolina appellate court opinions, including older South Carolina cases as far back as 1940. 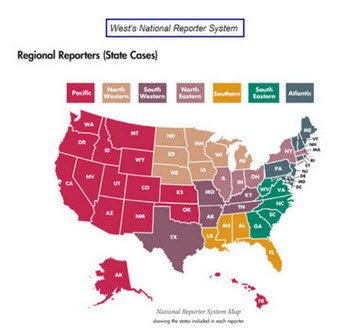 Free websites may allow you to choose a single state, search multiple states or search all state case law at once. Some free websites provide many years of state court opinions; however, free websites do not include headnotes and other enhancements to cases available through paid subscription databases.

The law school library maintains current versions of West regional reporters for access to all states' case law in print, which include headnotes.

South Carolina colleges and universities and public libraries may provide access to South Carolina and all other state cases through subscriptions to Westlaw or LexisNexis.

Some public library systems in South Carolina offer public access to Westlaw for its members. The University of South Carolina subscribes to NexisUni™ (formerly LexisNexis Academic).

With access to Westlaw or NexisUni, you can search for South Carolina cases by citation, by party name, by keyword search and using the headnotes from one good case. Westlaw uses West topics and key numbers, while NexisUni uses LexisNexis headnote topics.